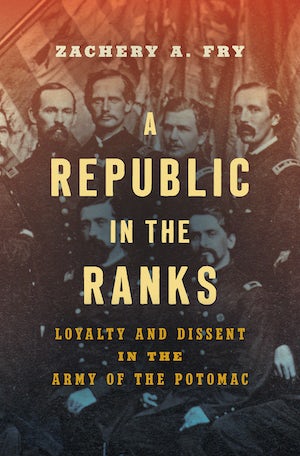 The Army of the Potomac was a hotbed of political activity during the Civil War. As a source of dissent widely understood as a frustration for Abraham Lincoln, its onetime commander, George B. McClellan, even secured the Democratic nomination for president in 1864. But in this comprehensive reassessment of the army's politics, Zachery A. Fry argues that the war was an intense political education for its common soldiers. Fry examines several key crisis points to show how enlisted men developed political awareness that went beyond personal loyalties. By studying the struggle between Republicans and Democrats for political allegiance among the army's rank and file, Fry reveals how captains, majors, and colonels spurred a pro-Republican political awakening among the enlisted men, culminating in the army's resounding Republican voice in state and national elections in 1864.

For decades, historians have been content to view the Army of the Potomac primarily through the prism of its general officer corps, portraying it as an arm of the Democratic Party loyal to McClellan's leadership and legacy. Fry, in contrast, shifts the story's emphasis to resurrect the successful efforts of proadministration junior officers who educated their men on the war's political dynamics and laid the groundwork for Lincoln's victory in 1864.

Zachery A. Fry is assistant professor of military history at the U.S. Army Command and General Staff College.
For more information about Zachery A. Fry, visit the Author Page.

"Highly recommended because of the insights on the time period, and a valuable contribution to understanding the common Civil War soldier."--Library Journal, starred review

“A valuable work for all Civil War buffs and scholars as well as those who study the impact of political beliefs inside the military and how those beliefs are formed. . . . Fry helps us understand the political dynamics within the Army of the Potomac, and why Lincoln was re-elected despite the efforts of Peace Democrats.”--Bob Trube, Bob on Books

“Fry has done a remarkable job of chronicling the political tides of the Army of the Potomac. . . . Which he traces with great diligence in soldier letters and resolutions published in hometown newspapers. . . . [This book provides] a vigorous new reason to revive the political history of the Civil War, and to understand how in Civil war America ‘politics seems to enter into everything.’”--Civil War Book Review

“Fry’s research and writing brings new focus to a different dimension of the Civil War. . . . Fry is to be commended for undertaking this investigation into the political leanings of the junior officers and men, and we are the beneficiaries of his conclusions and analysis.”--Journal of America’s Military Past

"A truly impressive debut...this deeply researched, compellingly written book belongs on the shelf of anyone interested in the American Civil War."--Army History

"The metamorphosis of the Army of the Potomac from 'McClellan's Bodyguards' into the self-styled 'guardians of the republic's virtue' is one of the most momentous, improbable, and--until now--untold tales of the Civil War. Drawing on a trove of previously untapped sources, this closely argued and clearly written book demonstrates how the army's junior officers remade the enlisted ranks in the image of Republican loyalty. Skillfully balancing stirrings on the home front, events on the battlefield, and the too-often-neglected months that yawned between military campaigns, Fry expertly chronicles the political seasoning of soldiers whose work--like the war's--would not end at Appomattox."--Brian Matthew Jordan, author of Marching Home: Union Veterans and Their Unending Civil War, a Pulitzer Prize finalist