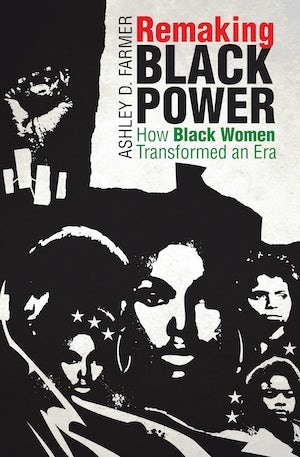 In this comprehensive history, Ashley D. Farmer examines black women’s political, social, and cultural engagement with Black Power ideals and organizations. Complicating the assumption that sexism relegated black women to the margins of the movement, Farmer demonstrates how female activists fought for more inclusive understandings of Black Power and social justice by developing new ideas about black womanhood. This compelling book shows how the new tropes of womanhood that they created--the “Militant Black Domestic,” the “Revolutionary Black Woman,” and the “Third World Woman,” for instance--spurred debate among activists over the importance of women and gender to Black Power organizing, causing many of the era’s organizations and leaders to critique patriarchy and support gender equality.

Making use of a vast and untapped array of black women’s artwork, political cartoons, manifestos, and political essays that they produced as members of groups such as the Black Panther Party and the Congress of African People, Farmer reveals how black women activists reimagined black womanhood, challenged sexism, and redefined the meaning of race, gender, and identity in American life.

"Through a rigorous multimedia analysis encompassing artwork, political cartoons, and manifestos, Farmer illuminates just how essential the women of the Black Power movement were, tracing their efforts in decades past to the continued centrality of Black women in the fight for social justice."--Esquire

“The compelling analysis and clear prose make this book a must-read for anyone who desires a more nuanced understanding of Black Power beyond the works by and about the select few men who are more commonly recognized as the movement’s leaders.”--Public Books

“Farmer challenges the basic assumptions of this period that the main role of women was marginal or custodial within Black Power formations, or that black women simply left Black Power organizations to form their own groups in reaction to intransigent sexism during the era. Instead, Farmer describes black women as engaged in intense ideological struggles to shape the political interventions and priorities of the organizations in which they were involved.”--American Historical Review

“This in-depth study by Farmer depicts strides against sexism, racism, and classism that black women from all walks of life made to blaze pathways toward freedom . . . this text reveals how black women have continued to be central figures in challenging long-standing social injustices.”--Choice