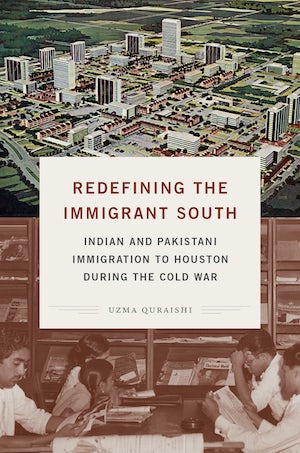 In the early years of the Cold War, the United States mounted expansive public diplomacy programs in the Global South, including initiatives with the recently partitioned states of India and Pakistan. U.S. operations in these two countries became the second- and fourth-largest in the world, creating migration links that resulted in the emergence of American universities, such as the University of Houston, as immigration hubs for the highly selective, student-led South Asian migration stream starting in the 1950s. By the late twentieth century, Houston’s South Asian community had become one of the most prosperous in the metropolitan area and one of the largest in the country.

Mining archives and using new oral histories, Uzma Quraishi traces this pioneering community from its midcentury roots to the early twenty-first century, arguing that South Asian immigrants appealed to class conformity and endorsed the model minority myth to navigate the complexities of a shifting Sunbelt South. By examining Indian and Pakistani immigration to a major city transitioning out of Jim Crow, Quraishi reframes our understanding of twentieth-century migration, the changing character of the South, and the tangled politics of race, class, and ethnicity in the United States.

“This book provides greater nuance to historical studies of Asians in the South, but it also reiterates the significance of an intersectional and relational approach to the study of racial formation.”--CHOICE

"Quraishi’s study of Indian and Pakistani immigration to Houston is not limited to the Cold War, and the migration patterns of South Asian Americans in the area continue to evolve to this day. Overall, Redefining the Immigrant South is a welcome contribution to a growing body of literature in Texas community studies."--Southwestern Historical Quarterly

"An expansive transnational history. . . . A wonderful contribution to a growing collection of ethnic southern histories that examine the region’s global connections, legacies of antiblackness, marginalization of Asian and Latinx communities, and the South’s diverse metropolitan spaces."--The Metropole

“Quraishi has offered a detailed history that situates South Asian migration to Houston within larger global, national, and regional histories… This is a nuanced story that both documents achievement and success while demonstrating the extent to which South Asian migrants during the Cold War benefitted from national civil rights and immigration reform…” – Diplomatic History

“Quraishi has written a well-documented and engaging book. It was a pleasure to read. She studies the first generation of South Asians in Houston after 1965 and gives a picture that is not common among histories of immigration.” – The Journal of Southern History