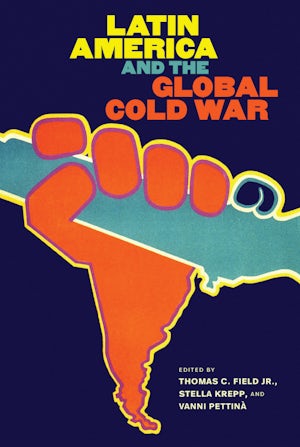 Latin America and the Global Cold War analyzes more than a dozen of Latin America’s forgotten encounters with Africa, Asia, and the Communist world, and by placing the region in meaningful dialogue with the wider Global South, this volume produces the first truly global history of contemporary Latin America. It uncovers a multitude of overlapping and sometimes conflicting iterations of Third Worldist movements in Latin America, and offers insights for better understanding the region’s past, as well as its possible futures, challenging us to consider how the Global Cold War continues to inform Latin America’s ongoing political struggles.

“Attempting to correct historical omissions that either neglect Latin America’s role in the Third World or discuss only how US foreign policy impacted the region, this volume acknowledges how Latin America’s engagement in global affairs fostered and contributed to conversations that challenged US imperialism and pushed for a multilateral approach to development that treated all states equally.”--CHOICE

“Important new volume. . . . An invaluable supplement to international histories of Latin America that remain too narrowly focused on the Western Hemisphere.”--H-Net Reviews

"The 'fruit of a multinational, multilingual effort by fifteen scholars,' this collection of essays reexamines Latin American history from a 'Third Worldist' perspective, defining the Third World as a global political project devoted to anti-imperialist liberation, sovereignty, and development. . . . With memorable anecdotes, concise chapters, and accessible theory, there is much to discover from Latin America and the Global Cold War for professional and general readers alike."--Origins

“…a must-read book for anyone interested in following the intellectual expansion and breadth of Cold War studies in relation to the region…signals the concrete emergence of a field that reaches beyond the Cold War to explore Latin America’s complex relationship with the world.” – Hispanic American Historical Review

"As exciting as the burgeoning new scholarship on the Latin American Cold War has been, it has given too little attention to the region's role as a fundamental participant in 'third world' projects elsewhere in the Global South. This big, bold volume, which brings together junior and senior scholars and promotes crosstalk between area specialists and 'new international historians,' provides a timely corrective. In the process it brings Latin America more integrally into critical discussions of the Global Cold War."--Gil Joseph, co-editor of In from the Cold: Latin America's New Encounter with the Cold War