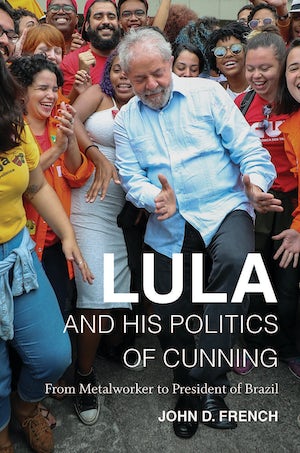 Known around the world simply as Lula, Luis Inácio Lula da Silva was born in 1945 to illiterate parents who migrated to industrializing São Paulo. He learned to read at ten years of age, left school at fourteen, became a skilled metalworker, rose to union leadership, helped end a military dictatorship—and in 2003 became the thirty-fifth president of Brazil. During his administration, Lula led his country through reforms that lifted tens of millions out of poverty. Here, John D. French, one of the foremost historians of Brazil, provides the first critical biography of the leader whom even his political opponents see as strikingly charismatic, humorous, and endearing.

Interweaving an intimate and colorful story of Lula’s life—his love for home, soccer, factory floor, and union hall—with an analysis of large-scale forces, French argues that Lula was uniquely equipped to influence the authoritarian structures of power in this developing nation. His cunning capacity to speak with, not at, people and to create shared political meaning was fundamental to his political triumphs. After Lula left office, his opponents convicted and incarcerated him on charges of money laundering and corruption—but his immense army of voters celebrated his recent release from jail, insisting that he is the victim of a right-wing political ambush. The story of Lula is not over.

John D. French is professor of history at Duke University and the author, most recently, of Drowning in Laws: Labor Law and Brazilian Political Culture.
For more information about John D. French, visit the Author Page.

“So why is French’s book today the definitive biography of Lula? The answer is that the author has managed to write about a prominent figure . . . without embracing the personalism so often associated with him. . . . French paints a vivid picture of a person whose importance derives from the fact that he is part of a broader story, a genuinely national one. These inter-related perspectives, personal and national, drive this work.”—Folha de Sao Paulo

"An immersive and broadly laudatory biography of former Brazilian President Luiz Inácio Lula da Silva, whom U.S. President Barack Obama once hailed as 'the most popular politician on earth.' French adroitly traces Lula’s beginnings as an impoverished rural migrant in industrializing São Paulo, where he became a skilled metalworker, and then his evolution into a determined trade union leader, a savvy negotiator, and, ultimately, a powerful orator and dominant politician."—Foreign Affairs

"The best analytical work yet on the former president, offering profound insights into Lula’s rise and his enduring appeal through shifting political tides. . . . Rather than a mere individualistic account, the book is a complex history of the seismic changes that reshaped Brazil’s social relations—relations between parents and children, brothers and sisters, husbands and wives, labor and capital, intellectuals and factory workers — in the twentieth century."—Jacobin

"Extraordinary. . . . French has ensured that debates about Lula, cunning, and their implica- tions for left politics in Brazil and beyond can henceforth move forward on firmer ground."—Alejandro Velasco, Labor

"The book's content is much broader and richer than the title suggests, offering a refreshingly vivid introduction to Brazil's recent history, politics, and class structure for lay readers . . . highly recommended."—CHOICE

"A remarkable accomplishment—in terms of theoretical and methodological approaches as well as in its breadth and wisdom."—American Historical Review