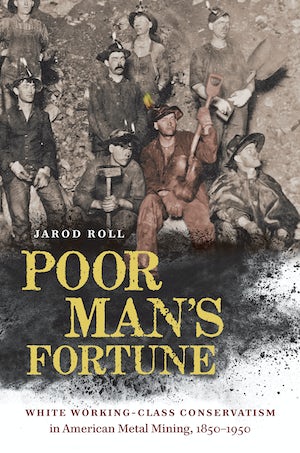 White working-class conservatives have played a decisive role in American history, particularly in their opposition to social justice movements, radical critiques of capitalism, and government help for the poor and sick. While this pattern is largely seen as a post-1960s development, Poor Man’s Fortune tells a different story, excavating the long history of white working-class conservatism in the century from the Civil War to World War II. With a close study of metal miners in the Tri-State district of Kansas, Missouri, and Oklahoma, Jarod Roll reveals why successive generations of white, native-born men willingly and repeatedly opposed labor unions and government-led health and safety reforms, even during the New Deal.

With painstaking research, Roll shows how the miners' choices reflected a deep-seated, durable belief that hard-working American white men could prosper under capitalism, and exposes the grim costs of this view for these men and their communities, for organized labor, and for political movements seeking a more just and secure society. Roll's story shows how American inequalities are in part the result of a white working-class conservative tradition driven by grassroots assertions of racial, gendered, and national privilege.

Jarod Roll is associate professor of history at the University of Mississippi. He is the author of Spirit of Rebellion: Labor and Religion in the New Cotton South and coauthor of The Gospel of the Working Class: Labor’s Southern Prophets in New Deal America


For more information about Jarod Roll, visit the Author Page.

“Poor Man’s Fortune does critical work in reconstructing the long history of the district (known as the Tri-State, including parts of Kansas and Oklahoma) and in placing workers at the center of a story with national and even international importance.”--Missouri Historical Review

“Jarod Roll has succeeded in rescuing an important and long-neglected aspect of labor history from obscurity. He has done so through diligent research in local records, oral histories, union archives, federal records, and obscure local newspapers…Although the events described and analyzed in Jarod Roll’s book ended seventy years ago, he has written a volume suitable for the era of Donald J. Trump and his most vociferous followers.”--Journal of Arizona History

"Roll offers a most provocative and important revision of American working-class history, and one cannot help but feel the drumbeat of post-2016 American politics reverberating throughout these pages."--Leon Fink, University of Illinois at Chicago

"Roll eschews simplistic explanations in this richly textured and exhaustively researched history. No other book explores this group of miners over such a long period of time, and Roll describes in painstaking detail how they adapted their individualistic aspirations to the shrinking opportunities available in a capitalist marketplace."--Ken Fones-Wolf, West Virginia University