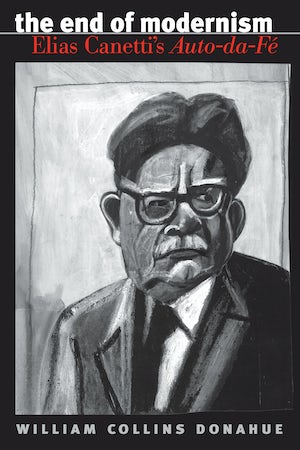 Nobel laureate Elias Canetti wrote his novel Auto-da-Fé (Die Blendung) when he and the twentieth century were still quite young. Rooted in the cultural crises of the Weimar period, Auto-da-Fé first received critical acclaim abroad--in England, France, and the United States--where it continues to fascinate readers of subsequent generations. The End of Modernism places this work in its cultural and philosophical contexts, situating the novel not only in relation to Canetti's considerable body of social thought, but also within larger debates on Freud and Freudianism, misogyny and modernism's "fragmented subject," anti-Semitism and the failure of humanism, contemporary philosophy and philosophical fads, and traditionalist notions of literature and escapist conceptions of history. The End of Modernism portrays Auto-da-Fé as an exemplum of "analytic modernism," and in this sense a crucial endpoint in the progression of postwar conceptions of literary modernism.

William Collins Donahue is the Cavanaugh Professor of the Humanities and the Director of the Initiative for Global Europe in the Keough School of Global Affairs at the University of Notre Dame. His is author or editor of many books including Holocaust as Fiction: Bernhard Schlink’s ‘Nazi’ Novels and their Films and Die große Mischkalkulation: Institutions, Social Import, and Market Forces in the German Literary Field.
For more information about William Collins Donahue, visit the Author Page.

“William Collins Donahue’s study of Canetti's only novel is ambitiously conceived and compellingly executed. In many respects Canetti scholarship has been waiting for the kind of broad contextual and intertextual grounding of Canetti’s major early work that it provides. By relating his reading of the novel to five cultural and (pseudo)intellectual discourses Donahue offers not just impressively cohesive and unusually well balanced interpretation of the novel, but also a well reasoned sense of its place in Canetti's overall production and, most importantly, a convincing reconception of its relationship to the canon of high- modernist fiction. … Donahue’s central argument for seeing Auto-da-Fé as an endpoint and analytic response to aesthetic high modernism--which valued the oversensitive, introspective individual at the expense of the social world--is persuasive, timely, and original. This argument marks his study as a landmark in Canetti criticism. Its achievement lies in its depiction of the novel’s attitude toward the menacing complexity of modernity, providing a broad and varied interpretive framework whose perspectives open onto the cultural and intellectual life of the interwar period in central Europe. Donahue carries his argument with convincing virtuosity through the course of his fine study.”--David Darby, German Studies Review

“This book will set the standard not only future Canetti scholarship but also for discussions about modernism and modernity. It is a must read for scholars working in the fields modern German/Comparative literature and the social sciences alike.”--Michael Mack, The German Quarterly

“[An] intellectually lively and immensely erudite study … this is cultural history as literary criticism at its very best.”--Julian Pierce, The Modern Language Review

“This excellent, innovative study approaches Canetti's novel Auto-da-Fé (Die Blendung) from a highly productive angle. … Donahue intends his study for a broad readership; thus he uses both the German original and the translation by Wedgwood. This consideration of English speaking readers along with the author's eloquence and lucid style make this thought-provoking study attractive to readers from hopefully contribute to Canetti's continued interest from international audiences.”--Dagmar Lorenz, Modern Austrian Literature

“Donahue’s remarkable study of Elias Canetti's Die Blendung (Auto-da-Fé, 1935) dwells in some thought-provoking shade. It is just far enough away from the novel’s blinding light to demonstrate how what Donahue terms Canetti’s <

"If one has time to read only one recent English-language study of Elias Canetti's 1935 Auto-da-Fé, this would be the book. . . . no other interpretation of the novel has brought all of these contexts together as convincingly, providing the most complete overview to date of Canetti's novel as a satire of contemporary intellectual and social phenomena."--Monatshefte