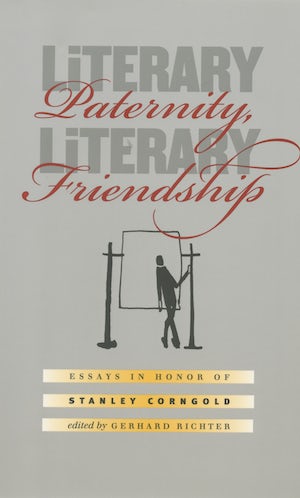 The twenty-one original essays in this volume offer a rigorous reconsideration of modern forms of paternity and friendship as they emerge in works by writers and philosophers from the eighteenth through the twentieth century. Exploring various models of these twin themes, contributors examine writings of canonical figures such as Goethe, Schiller, Hölderlin, Kleist, and Brentano, as well as Kafka, Benjamin, and Arendt. Together, the essays combine an emphasis on the German literary-philosophical tradition with comparative approaches, offering both theoretical discussions and sophisticated readings of crucial texts that have helped shape our contemporary literary engagement with paternity and friendship.

This collection honors Stanley Corngold, an influential scholar and teacher who taught German at Princeton University for more than forty years.

"Stanley Corngold is one of the most original literary critics and influential teachers of literature in North America. This collection of essays in his honor is a fitting tribute to the extraordinary role he has played in the lives of so many as a mentor, inspiration, and friend."--Robert Norton, University of Notre Dame

"This is a learned, ambitious, and illuminating collection, often characterized by a crackling intelligence and brimming with sophisticated readings. Taken together, the essays constitute an important new reflection on the interminably complicated and productive question of paternity, responsibility, and what Derrida has so well called the politiques de l'amitié. The book renews my faith in the genre of the Festschrift, for in its overall conception and in its local details it is rigorous, subtle, and above all ethical in its negotiations with the materials at hand--exactly like the work of the scholar, colleague, and friend to whom the book is movingly dedicated."--David L. Clark, McMaster University