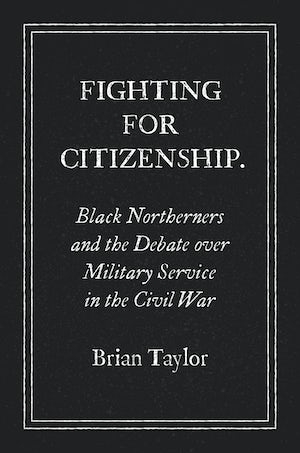 In Fighting for Citizenship, Brian Taylor complicates existing interpretations of why black men fought in the Civil War. Civil War–era African Americans recognized the urgency of a core political concern: how best to use the opportunity presented by this conflict over slavery to win abolition and secure enduring black rights, goals that had eluded earlier generations of black veterans. Some, like Frederick Douglass, urged immediate enlistment to support the cause of emancipation, hoping that a Northern victory would bring about the end of slavery. But others counseled patience and negotiation, drawing on a historical memory of unfulfilled promises for black military service in previous American wars and encouraging black men to leverage their position to demand abolition and equal citizenship. In doing this, they also began redefining what it meant to be a black man who fights for the United States.

Brian Taylor is a public historian and scholar of the Civil War era who has taught at Georgetown University and the University of Maryland, Baltimore County.
For more information about Brian Taylor, visit the Author Page.

“Highly recommended. . . . this will be a major resource for those studying African Americans during the Civil War and the African American military experience generally.” –Choice

“The fluidity of Taylor’s writing and the importance of the subject matter make this book useful to a wide range of scholars seeking a fresh analysis of the African American experience during the Civil War.” –Journal of Southern History

""To understand why nearly 33,000 free Black men from Northern states signed up to fight for the Union is the subject of Brian Taylor's probing and informative monograph."-Civil War Times

“By uncovering and assessing internal debates within Northern black communities about military service, Fighting for Citizenship will make an important addition to the burgeoning historical literature on African Americans during the Civil War.”--John David Smith, author of Lincoln and the U.S. Colored Troops

“Taylor has found something of extraordinary importance: Americans had really no idea of what national citizenship meant, but African Americans in their struggles for it defined American citizenship. This is a new, significant contribution to the historiography of the Civil War era and African American history.”--Barbara A. Gannon, author of Americans Remember Their Civil War