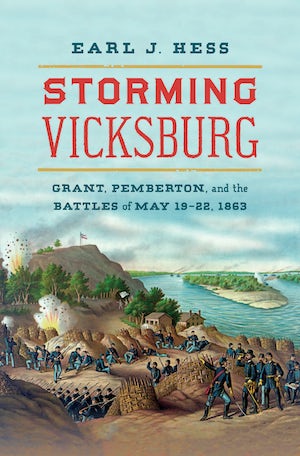 The most overlooked phase of the Union campaign to capture Vicksburg, Mississippi, was the time period from May 18 to May 25, 1863, when Ulysses S. Grant closed in on the city and attempted to storm its defenses. Federal forces mounted a limited attack on May 19 and failed to break through Confederate lines. After two days of preparation, Grant’s forces mounted a much larger assault. Although the Army of the Tennessee had defeated Confederates under John C. Pemberton at Champion Hill on May 16 and Big Black River on May 17, the defenders yet again repelled Grant’s May 22 attack. The Gibraltar of the Confederacy would not fall until a six-week siege ended with Confederate surrender on July 4.

In Storming Vicksburg, military historian Earl J. Hess reveals how a combination of rugged terrain, poor coordination, and low battlefield morale among Union troops influenced the result of the largest attack mounted by Grant’s Army of the Tennessee. Using definitive research in unpublished personal accounts and other underutilized archives, Hess makes clear that events of May 19–22 were crucial to the Vicksburg campaign’s outcome and shed important light on Grant’s generalship, Confederate defensive strategy, and the experience of common soldiers as an influence on battlefield outcomes.

Earl J. Hess is Stewart W. McClelland Chair in History at Lincoln Memorial University and award-winning author of many books on the Civil War, including, most recently, Fighting for Atlanta: Tactics, Terrain, and Trenches in the Civil War.

"Has deservedly reached the apex of Vicksburg scholarship to date and does justice to its author's historical acumen. Highly recommended for all U.S. Middle Period and Civil War historians and biographers, together with students of military command and field strategy."--Library Journal, starred review

"Storming Vicksburg tells the story of the most decisive struggle of the Civil War in vast detail and a splendid sweep of analysis."--Steven E. Woodworth, author of The Great Struggle: America's Civil War

"Earl Hess is one of the finest analysts of Civil War operations now at work. Historians have long tended to treat Grant's assaults against Vicksburg on May 19 and May 22 merely as a prelude to the lengthy siege that ensued. In this fascinating book, Hess demonstrates that the attacks deserve close attention in their own right and offers a measured reappraisal of both Grant and his Confederate counterpart, John C. Pemberton."--Mark Grimsley, author of The Hard Hand of War: Union Military Policy Toward Southern Civilians, 1861-1865