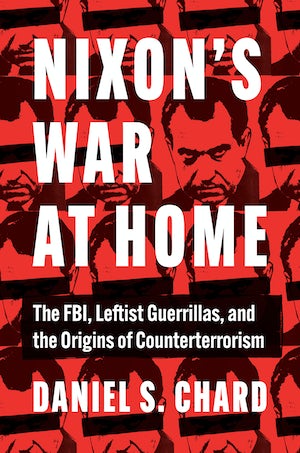 During the presidency of Richard Nixon, homegrown leftist guerrilla groups like the Weather Underground and the Black Liberation Army carried out hundreds of attacks in the United States. The FBI had a long history of infiltrating activist groups, but this type of clandestine action posed a unique challenge. Drawing on thousands of pages of declassified FBI documents, Daniel S. Chard shows how America's war with domestic guerrillas prompted a host of new policing measures as the FBI revived illegal spy techniques previously used against communists in the name of fighting terrorism. These efforts did little to stop the guerrillas—instead, they led to a bureaucratic struggle between the Nixon administration and the FBI that fueled the Watergate Scandal and brought down Nixon. Yet despite their internal conflicts, FBI and White House officials developed preemptive surveillance practices that would inform U.S. counterterrorism strategies into the twenty-first century, entrenching mass surveillance as a cornerstone of the national security state.

Connecting the dots between political violence and "law and order" politics, Chard reveals how American counterterrorism emerged in the 1970s from violent conflicts over racism, imperialism, and policing that remain unresolved today.

"An immersive and eye-opening account of how the Nixon administration’s fight against the Weather Underground, the Black Liberation Army, and other insurgent groups gave rise to counterterrorism tactics and philosophies of 'punitive policing' that reshaped American politics. . . . Making excellent use of declassified FBI documents, Nixon’s White House tapes, and other sources, Chard shines a light on this turbulent era."—Publishers Weekly

“An impressive first book by a young historian. . . . Nixon’s War at Home offers genuine contributions to the continuing examination of the Long Sixties.” —CHOICE

"Besides being a well-documented research project supported by a robust amount of references, the book is successful in explaining the conceptual development of counterterrorism."—The Society for U.S. Intellectual History

“Outside of seemingly paranoid circles, counterterrorism was a little-discussed part of the American state long before 9/11. In this incredibly researched and well-written book, Daniel S. Chard guides us into the multiple forms that the efforts to counter insurgencies in the 1960s and 1970s took. Anyone concerned about our freedoms needs to read this, and now.”—Susan M. Reverby, author of Co-Conspirator for Justice: The Revolutionary Life of Dr. Alan Berkman

"With clarity and novelistic freshness, this book offers a persuasive account of the advent of ‘counterterrorism’ as a practice and priority of the U.S. state as it responded to the ‘guerrilla’ violence of the late 1960s and early 1970s. It is also a fascinating, personality-driven story of the bureaucratic infighting that dogged law enforcement. Amidst all of this is a revelatory narrative of the final years of J. Edgar Hoover, long vilified as an enemy of civil liberties, as he attempted to resist Richard Nixon's efforts to interfere with FBI practices, leading to an utterly novel connection between the war on domestic terrorism and the Watergate scandal. Drawing from countless FBI documents and presidential communications, this is a stellar work of history and a major achievement."—Jeremy Varon, author of Bringing the War Home: The Weather Underground, the Red Army Faction, and Revolutionary Violence in the Sixties and Seventies

“Daniel Chard is the first historian to show how the FBI's war on antiracist, anti-imperialist radicals led to the downfall of the Nixon presidency while also establishing a template for the broad-brush, inhumane, and ineffective counterterrorism policies of the United States after 9/11. Nixon's War at Home is original, fascinating, and as relevant as ever.”—Christian G. Appy, author of American Reckoning: The Vietnam War and Our National Identity