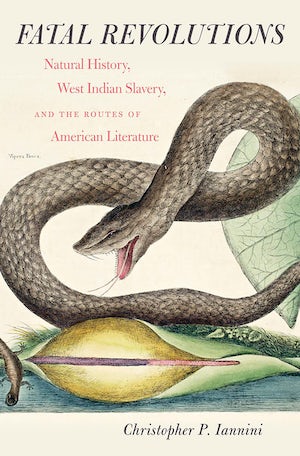 Drawing on letters, illustrations, engravings, and neglected manuscripts, Christopher Iannini connects two dramatic transformations in the eighteenth-century Atlantic world--the emergence and growth of the Caribbean plantation system and the rise of natural science. Iannini argues that these transformations were not only deeply interconnected, but that together they established conditions fundamental to the development of a distinctive literary culture in the early Americas. In fact, eighteenth-century natural history as a literary genre largely took its shape from its practice in the Caribbean, an oft-studied region that was a prime source of wealth for all of Europe and the Americas.

The formal evolution of colonial prose narrative, Ianinni argues, was contingent upon the emergence of natural history writing, which itself emerged necessarily from within the context of Atlantic slavery and the production of tropical commodities. As he reestablishes the history of cultural exchange between the Caribbean and North America, Ianinni recovers the importance of the West Indies in the formation of American literary and intellectual culture as well as its place in assessing the moral implications of colonial slavery.

"Fatal Revolutions is a significant contribution . . . in recent studies of the relationship between natural history and literary culture in European colonies in the Americas."--Journal of American History

"[A] short, dense, and rewarding series of essays on writers on nature in the lower South and the West Indies. . . . Iannini is to be applauded for showing how [literary nationalism was] both more central to eighteenth-century discourse than has been usually appreciated and also more useful for understanding how modernity was expressed in the Americas."--American Historical Review

“Iannini’s Fatal Revolutions points to the critical elisions in a traditional model of American literary history focused on the development of the United States.”--American Quarterly

“Fatal Revolutions is a book of outstanding scholarship that will be of interest to a wide range of readers interested in Atlantic history, colonial nature, slavery, and “plants and empires.” It is also a beautifully produced volume, sporting numerous striking illustrations that Iannini analyses with acumen and skill.”--Archives of Natural History

"Iannini skillfully incorporates leading scholarship in early American studies to suggest new directions for an ecocriticism that remains bound within national borders and that takes for granted strict categories of place. Required reading."--Interdisciplinary Studies in Literature and Environment

“Iannini’s text is an important, lucidly argued, and gorgeously produced study. It is necessary reading for literary scholars, historians, and art historians of the Atlantic World.”--The Americas