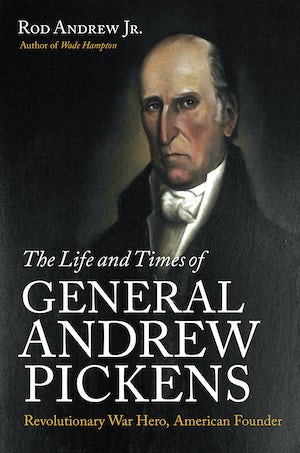 Andrew Pickens (1739–1817), the hard-fighting South Carolina militia commander of the American Revolution, was the hero of many victories against British and Loyalist forces. In this book, Rod Andrew Jr. offers an authoritative and comprehensive biography of Pickens the man, the general, the planter, and the diplomat. Andrew vividly depicts Pickens as he founds churches, acquires slaves, joins the Patriot cause, and struggles over Indian territorial boundaries on the southern frontier. Combining insights from military and social history, Andrew argues that while Pickens’s actions consistently reaffirmed the authority of white men, he was also determined to help found the new republic based on broader principles of morality and justice.

After the war, Pickens sought a peaceful and just relationship between his country and the southern Native American tribes and wrestled internally with the issue of slavery. Andrew suggests that Pickens’s rise to prominence, his stern character, and his sense of duty highlight the egalitarian ideals of his generation as well as its moral shortcomings--all of which still influence Americans’ understanding of themselves.

“A comprehensive biography of Andrew Pickens, a backcountry planter, general, and diplomat on the southeastern frontier in the era of the American Revolution and new nation. Recommended.”--Choice

“An outstanding book, long awaited by history buffs that will serve as a milestone on an important Revolutionary War military leader.”--McCormick Messenger

“Invaluable for those interested in the finer points of the Revolution in the Carolina backcountry, the postwar shaping of frontier democracy, or a historical work that centers evangelical Christianity in the Revolution and early republic.”--North Carolina Historical Review

“Provides a well-deserved new treatment of Pickens as a military hero, civic leader, and self-made man who was not only a product of the frontier Revolutionary ethos of his day, but also an important shaper of it . . . a masterfully told story.”--On Point

“Other biographies of Pickens have been written, but this is the best. Rod Andrew has done a great job of sifting through the available evidence to define the man and his life.”--Journal of Americas Military Past