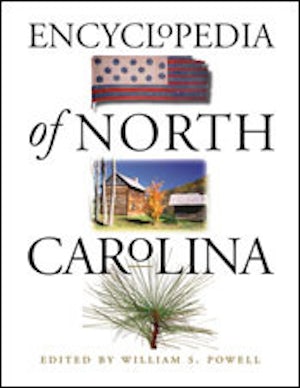 A Library Journal Best Reference of 2006

2007 Award of Merit, American Association for State and Local History

The first single-volume reference to the events, institutions, and cultural forces that have defined the state, the Encyclopedia of North Carolina is a landmark publication that will serve those who love and live in North Carolina for generations to come. Editor William S. Powell, whom the Raleigh News & Observer described as a "living repository of information on all things North Carolinian," spent fifteen years developing this volume. With contributions by more than 550 volunteer writers--including scholars, librarians, journalists, and many others--it is a true "people's encyclopedia" of North Carolina.

"An outstanding single-volume encyclopedia spanning the 400-year history of the state. . . . An important contribution to regional history collections and is indispensable for all North Carolina libraries."--CHOICE

“With over 2000 A-Z entries written by 550 contributors, this is the ultimate ready-reference to the state.”--Library Journal

"An informative and engaging guide of North Carolina. Never before has the entire history and culture of the state been skillful[y] explicated in a single all-inclusive book."--The Courier

“From the Greensboro sit-ins to the Bank of America, from Krispy Kreme to the Ugly Club, from the first flight to the Bare Boxing Incident--if it grew, happened or was consumed in the Old North State, chances are good that it’s included in the Encyclopedia of North Carolina.”--Carolina Alumni Review