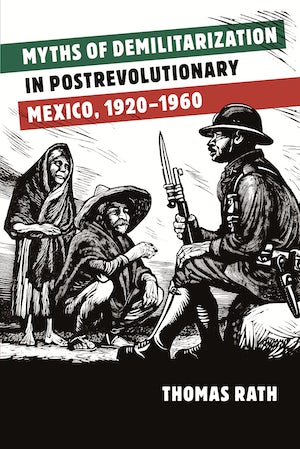 At the end of the Mexican Revolution in 1920, Mexico's large, rebellious army dominated national politics. By the 1940s, Mexico's Institutional Revolutionary Party (PRI) was led by a civilian president and claimed to have depoliticized the army and achieved the bloodless pacification of the Mexican countryside through land reform, schooling, and indigenismo. However, historian Thomas Rath argues, Mexico's celebrated demilitarization was more protracted, conflict-ridden, and incomplete than most accounts assume. Civilian governments deployed troops as a police force, often aimed at political suppression, while officers meddled in provincial politics, engaged in corruption, and crafted official history, all against a backdrop of sustained popular protest and debate.

Using newly available materials from military, intelligence, and diplomatic archives, Rath weaves together an analysis of national and regional politics, military education, conscription, veteran policy, and popular protest. In doing so, he challenges dominant interpretations of successful, top-down demilitarization and questions the image of the post-1940 PRI regime as strong, stable, and legitimate. Rath also shows how the army's suppression of students and guerrillas in the 1960s and 1970s and the more recent militarization of policing have long roots in Mexican history.

Thomas Rath is lecturer in the History of Latin America, University College London.
For more information about Thomas Rath, visit the Author Page.

“Deeply researched, well-crafted and lucidly written. . . . Rath provides throughout an impressive array of detail. . . [that] significantly reshapes our understanding of the nature of civil-military relations in post-revolutionary Mexico.”--International Affairs

“A very nice study of state-building in the aftermath of revolution.”--Journal of Military History

“This book is written with Mexican and Latin American scholars in mind, but deserves a larger audience among policy-makers and scholars. It is a very nice study of state-building in the aftermath of revolution.”--Journal of Military History

"Introduces fresh insights. . . . Will be of great interest to historians."--Hispanic American Historical Review

"A much needed account of Mexico's postrevolutionary journey."--Review of Politics