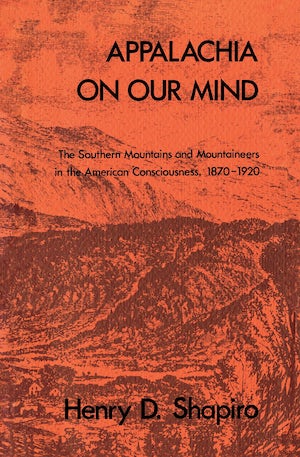 Appalachia on Our Mind is not a history of Appalachia. It is rather a history of the American idea of Appalachia. The author argues that the emergence of this idea has little to do with the realities of mountain life but was the result of a need to reconcile the "otherness" of Appalachia, as decribed by local-color writers, tourists, and home missionaries, with assumptions about the nature of America and American civilization.

Between 1870 and 1900, it became clear that the existence of the "strange land and peculiar people" of the southern mountains challenged dominant notions about the basic homogeneity of the American people and the progress of the United States toward achiving a uniform national civilization. Some people attempted to explain Appalachian otherness as normal and natural -- no exception to the rule of progress. Others attempted the practical integration of Appalachia into America through philanthropic work. In the twentieth century, however, still other people began questioning their assumptions about the characteristics of American civilization itself, ultimately defining Appalachia as a region in a nation of regions and the mountaineers as a people in a nation of peoples.

In his skillful examination of the "invention" of the idea of Appalachia and its impact on American thought and action during the early twentieth century, Mr. Shapiro analyzes the following: the "discovery" of Appalachia as a field for fiction by the local-color writers and as a field for benevolent work by the home missionaries of the northern Protestant churches; the emergence of the "problem" of Appalachia and attempts to solve it through explanation and social action; the articulation of a regionalist definition of Appalachia and the establishment of instituions that reinforced that definition; the impact of that regionalistic definition of Appalachia on the conduct of systematic benevolence, expecially in the context of the debate over child-labor restriction and the transformation of philanthropy into community work; and the attempt to discover the bases for an indigenous mountain culture in handicrafts, folksong, and folkdance.

Henry D. Shapiro is the author of Confiscation of Confederate Property in the North; Clifton: Neighborhood and Community in an Urban Setting; and editor (with Zane L. Miller) of Physician to the West: Selected Writings of Daniel Drake on Science and Society.
For more information about Henry D. Shapiro, visit the Author Page.

"Shapiro has written an important book with an unusual goal. He does not deal with Appalachia as a land and people but, rather, with the manner in which they have been perceived by writers, missionaries, and bureaucrats who have described or worked in the region."--Journal of American History