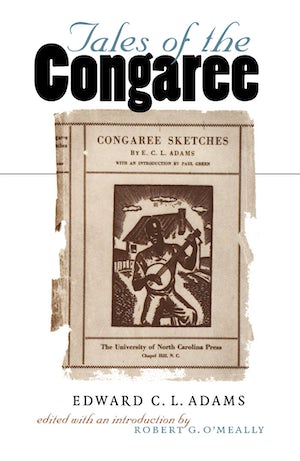 This volume brings back into print a remarkable record of black life in the 1920s, chronicled by Edward C.L. Adams, a white physician from the area around the Congaree River in central South Carolina. It reproduces Adams's major works, Congaree Sketches (1927) and Nigger to Nigger (1928), two collections of tales, poems, and dialogues from blacks who worked his land, presented in the black vernacular language. They are supplemented here by a play, Potee's Gal, and some brief sketches of poor whites.

What sets Adams's tales apart from other such collections is the willingness of his black informants to share with him not only their stories of rabbits and "hants" but also their feelings on such taboo subjects as lynchings, Jim Crow courts, and chain gangs. Adams retells these tales as if the blacks in them were talking only among themselves. Whites do not appear in these works, except as rare background figures and topics of conversation by Tad, Scip, and other black storytellers. As Tad says, "We talkin' to we."

That Adams was permitted to hear such tales at all is part of the mystery that Robert O'Meally explains in his introduction. The key to the mystery is Adams's ability -- in his life, as in his works -- to wear both black and white masks. He remained a well-placed member of white society at the same time that he was something of a maverick within it. His black informants therefore saw him not only as someone more likeable and trustworthy than most whites but also as someone who was in a position to help them in some way if he understood more about their lives.

As a writer, O'Meally suggests, Adams was not simply an objective recorder of folklore. By donning a black mask, Adams was able to project attitudes and values that most whites of his place and time would have disavowed. As a result, his tales have a complexity and richness that make them an authentic witness to the black experience as well as a lasting contribution to American letters.

Edward Clarkson Leverett Adams was a white physician working in the area around the Congaree River in central South Carolina in the 1920s.
For more information about Robert G. O'Meally, visit the Author Page.

"A rich and important collection that offers a poignant and powerful glimpse of black life as it once was."--New York Times Book Review