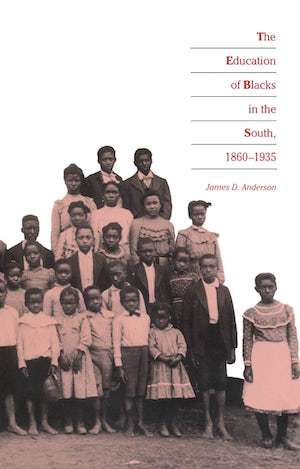 James Anderson critically reinterprets the history of southern black education from Reconstruction to the Great Depression. By placing black schooling within a political, cultural, and economic context, he offers fresh insights into black commitment to education, the peculiar significance of Tuskegee Institute, and the conflicting goals of various philanthropic groups, among other matters.

Initially, ex-slaves attempted to create an educational system that would support and extend their emancipation, but their children were pushed into a system of industrial education that presupposed black political and economic subordination. This conception of education and social order--supported by northern industrial philanthropists, some black educators, and most southern school officials--conflicted with the aspirations of ex-slaves and their descendants, resulting at the turn of the century in a bitter national debate over the purposes of black education. Because blacks lacked economic and political power, white elites were able to control the structure and content of black elementary, secondary, normal, and college education during the first third of the twentieth century. Nonetheless, blacks persisted in their struggle to develop an educational system in accordance with their own needs and desires.

James Anderson is professor of the history of education at the University of Illinois at Urbana-Champaign and coeditor of New Perspectives on Black Educational History.
For more information about James D. Anderson, visit the Author Page.

"In its unmatched survey of the primary sources of black education, its provocative judgments, and its ability to recapture the voices of southern blacks striving for educational equity despite great obstacles, The Education of Blacks in the South stands as a notable scholarly achievement."--Georgia Historical Quarterly

“This is a fine piece of work that will deservedly attract considerable attention from historians and other educators.”--Stanley L. Engerman, University of Rochester