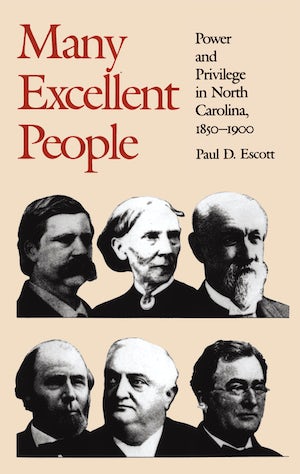 1986 Mayflower Cup for Nonfiction, Society of Mayflower Descendants in the State of North Carolina

Many Excellent People examines the nature of North Carolina's social system, particularly race and class relations, power, and inequality, during the last half of the nineteenth century. Paul Escott portrays North Carolina's major social groups, focusing on the elite, the ordinary white farmers or workers, and the blacks, and analyzes their attitudes, social structure, and power relationships. Quoting frequently from a remarkable array of letters, journals, diaries, and other primary sources, he shows vividly the impact of the Civil War, Emancipation, Reconstruction, Populism, and the rise of the New South industrialism on southern society.

Working within the new social history and using detailed analyses of five representative counties, wartime violence, Ku Klux Klan membership, stock-law legislation, and textile mill records, Escott reaches telling conclusions on the interplay of race, class, and politics. Despite fundamental political and economic reforms, Escott argues, North Carolina's social system remained as hierarchical and undemocratic in 1900 as it had been in 1850.

Paul D. Escott is Reynolds Professor of history and dean of the Undergraduate College of Arts and Sciences at Wake Forest University. His books include After Secession, Slavery Remembered, A People and A Nation, and North Carolina Yeoman.
For more information about Paul D. Escott, visit the Author Page.

"Exhaustively researched and meticulously documented, the book emphasizes that, after all, history is the story of people. . . . A fine addition to the literature about the nineteenth-century South and an example of the understanding of the period that is possible from such an ambitious overview."--North Carolina Historical Review

"In this well-researched and thought-provoking survey of society and politics in North Carolina from the eve of the Civil War to the end of the nineteenth century, Paul D. Escott adroitly examines social attitudes, power relationships, and other issues relating to class, race, and power."--Georgia Historical Quarterly 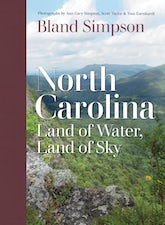 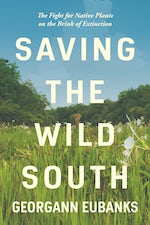