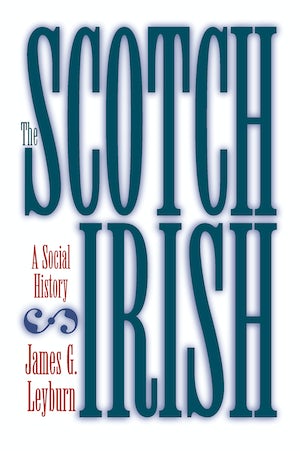 Dispelling much of what he terms the 'mythology' of the Scotch-Irish, James Leyburn provides an absorbing account of their heritage. He discusses their life in Scotland, when the essentials of their character and culture were shaped; their removal to Northern Ireland and the action of their residence in that region upon their outlook on life; and their successive migrations to America, where they settled especially in the back-country of Pennsylvania, Virginia, the Carolinas, and Georgia, and then after the Revolutionary War were in the van of pioneers to the west.

"[Leyburn] has produced the best synthesis of what is known of the Scotch-Irish in their two centuries as an identifiably distinct people. . . . It is a tribute to the author's skill in writing that the epic quality survives even when he has discredited the many myths that have come to surround it. . . . We have to thank [Leyburn] for a most readable contribution to the growing body of sophisticated literature on immigration in the colonial period."--Pennsylvania Magazine of History and Biography

"The work of an able sociologist who is equally proficient as a historian, this scholarly, objective study of a significant immigrant group is of such merit that it should supersede most of its predecessors. Against the background of the history of the Lowland Scot, as he moved from Scotland to Ireland to America, the author has made a sober reappraisal of how character and culture were molded by these migrations. His style is clear and most readable."--Mississippi Valley Historical Review

"Shrewd and novel speculations on frontier society and national character. . . . The best survey yet of the Scotch-Irish."--American Historical Review

"This admirable book takes a fresh and frank look at the Scotch-Irish, examining with discernment the effect on them of their long migration from Scotland through Ulster to colonial America. . . . Soundly conceived and written with insight and verve, the book dispels some common misconceptions of the Scotch-Irish."--Journal of Presbyterian History

"Clearly written and well organized. The chief value of the work lies in its successful attempt to provide a natural connection between Scotch-Irish history in Scotland and Ulster and that in America. . . . Leyburn has provided the general reader with an extremely useful account."--North Carolina Historical Review

"Particularly welcome as a general study of the Scotch-Irish before and during their move to America. . . . This book shows clearly the usefulness of an interdisciplinary approach to social history."--Maryland Historical Magazine