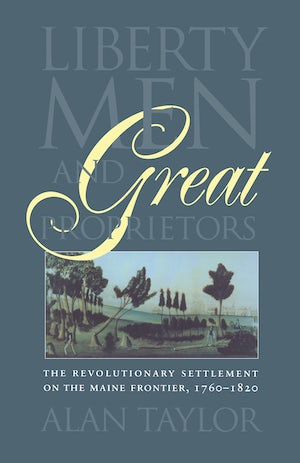 This detailed exploration of the settlement of Maine beginning in the late eighteenth century illuminates the violent, widespread contests along the American frontier that served to define and complete the American Revolution. Taylor shows how Maine's militant settlers organized secret companies to defend their populist understanding of the Revolution.

Alan Taylor is professor of history at the University of California, Davis, and author of the Pulitzer Prize-winning William Cooper's Town: Power and Persuasion on the Frontier of the Early American Republic.
For more information about Alan Taylor, visit the Author Page.

"A fascinating, richly textured story that will have a major impact on our understanding of American social history during the Revolution and early Republic."--Robert A. Gross, College of William and Mary

"A book that will changed the way we think about early American frontier settlement and the political struggles that accompanied it."--William J. Cronon, Yale University

"Taylor's book is a major milepost that shows how far historians have come in exploring the significance of the frontier in American history. . . . It is a work of subtlety, complexity, and best of all, true discovery. The frontier landscape in Taylor's book . . . is inhabited by real people, who are full of conflicts and contradictions. By being sensitive to their economic, social, and spiritual aspirations, Taylor makes their world believable and meaningful. And perhaps most important, he reminds us that, no matter what kind of order proprietors and planners tried to impose on the landscape and the people themselves, the history of the American frontier has never been as neat as some people would like."--Gregory H. Nobles, Reviews in American History