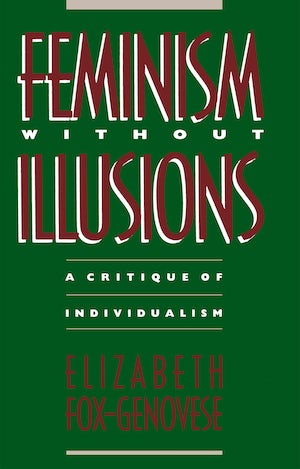 To purchase online via an independent bookstore, visit Bookshop.org
In arguing that feminism has neither adequately acknowledged its ties to individualism nor squarely faced the extent to which many of its campaigns for social justice are based on the insistence of rights for the individual over good of the community, this study analyzes current political theory and its application to affirmative action, comparative worth and abortion rights. The author also examines the debate over feminist history and the relationship between feminism and postmodernism.

"Fox-Genovese has written a courageous, clear-sighted book that feminists will have to reckon with for a long time to come. Perhaps it is not too much to hope that it will inaugurate a whole new stage in the long debate about men and women."--New Republic

"With that forthrightness which has become her trademark, Elizabeth Fox-Genovese argues that feminism, too wedded to individualism, should make sustained contact with more deeply held social traditions. Against those who insist that what divides us must be celebrated as there is no common culture, Fox-Genovese insists that commonalities are possible even as inequities must be fought. This is a refreshing and highly readable text."--Jean Bethke Elshtain, Vanderbilt University

"Fox-Genovese is at her best as a cultural critic, offering valuable commentaries on feminism and cultural trends in our society."--Kathryn Kish Sklar, State University of New York at Binghamton

"In this courageous and important work, Fox-Genovese dissects the over-simplifications and logical confusions that have undermined much feminist theory. Her denunciation of pervasive individualism and her impassioned call for innovative, generative forms of communal thinking may signal the beginning of a new era of feminist thought."--Cynthia Griffin Wolff, Massachusetts Institute of Technology

"A revolutionary book. It looks beyond today's familiar discussions of feminism into a future when women's experience will play a major role in building a truly humanist society. It will, I think, be read for years to come."--Elizabeth Janeway