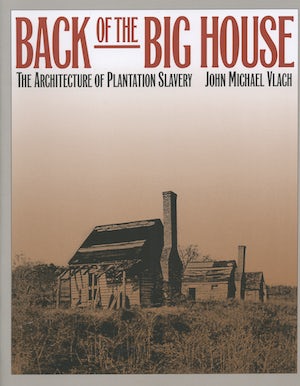 Behind the "Big Houses" of the antebellum South existed a different world, socially and architecturally, where slaves lived and worked. John Michael Vlach explores the structures and spaces that formed the slaves' environment. Through photographs and the words of former slaves, he portrays the plantation landscape from the slaves' own point of view.

The plantation landscape was chiefly the creation of slaveholders, but Vlach argues convincingly that slaves imbued this landscape with their own meanings. Their subtle acts of appropriation constituted one of the more effective strategies of slave resistance and one that provided a locus for the formation of a distinctive African American culture in the South.

Vlach has chosen more than 200 photographs and drawings from the Historic American Buildings Survey--an archive that has been mined many times for its images of the planters' residences but rarely for those of slave dwellings. In a dramatic photographic tour, Vlach leads readers through kitchens, smokehouses, dairies, barns and stables, and overseers' houses, finally reaching the slave quarters. To evoke a firsthand sense of what it was like to live and work in these spaces, he includes excerpts from the moving testimonies of former slaves drawn from the Federal Writers' Project collections.

John Michael Vlach is professor of American studies and anthropology and director of the folklife program at The George Washington University. His books include The Planter’s Prospect: Privilege and Slavery in Plantation Paintings and The Afro-American Tradition in the Decorative Arts.

"[Vlach] presents us with a book that is at once album, introduction, and overview of the complexity and diversity of southern plantation architecture."--South Carolina Historical Magazine

"This is a solid piece of documentation which forcefully illuminates a neglected yet pivotal aspect of eighteenth- and nineteenth-century reality."--Maryland Historical Magazine

"One of the most user-friendly studies of African-American material culture ever written."--American Historical Review

"Contribute[s] significantly to the architectural no less than the social history of the United States from colonization to the Civil War."--Journal of the Early Republic