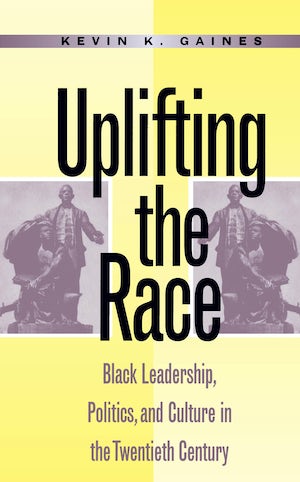 Amidst the violent racism prevalent at the turn of the twentieth century, African American cultural elites, struggling to articulate a positive black identity, developed a middle-class ideology of racial uplift. Insisting that they were truly representative of the race's potential, black elites espoused an ethos of self-help and service to the black masses and distinguished themselves from the black majority as agents of civilization; hence the phrase 'uplifting the race.'

Drawing on the work of W. E. B. Du Bois, Anna Julia Cooper, Alice Dunbar-Nelson, Hubert H. Harrison, and others, Gaines focuses on the intersections between race and gender in both racial uplift ideology and black nationalist thought, showing that the meaning of uplift was intensely contested even among those who shared its aims. Ultimately, elite conceptions of the ideology retreated from more democratic visions of uplift as social advancement, leaving a legacy that narrows our conceptions of rights, citizenship, and social justice.

Kevin K. Gaines is associate professor of history and African American studies at the University of Michigan.

"A detailed and engaging book which explores a neglected aspect of US foreign policy. . . . The emotional resonance articulated in the epilogue regarding diasporean African' quest to celebrate their African heritage in addition to formulating a political relationship with Ghana makes a fitting end to this insightful book."--Modern African Studies

“This work represents the promise of what the new scholarship on the African American intellectual and social experience in the United States might bring. Gaines’s book is a refreshing demonstration of what can be yielded from a serious and scholarly contemplation of our American past, and it opens new doors of inquiry into the fields of African American intellectual history, gender studies, cultural studies, and political history.”--American Quarterly

"A bold and exciting work."--Journal of Southern History

"Readers will be left with a much more subtle understanding of the sad paradox of uplift, of African Americans trying to belong to a society that was defined in part by their exclusion."--Publishers Weekly

"Gaines addresses the black elite's preoccupation with uplift ideology throughout the 20th century and the tension that particular doctrine caused among African American intellectuals."--Choice

"A challenging exploration of an important strand of African American thought--the ideology of racial uplift."--Journal of American History