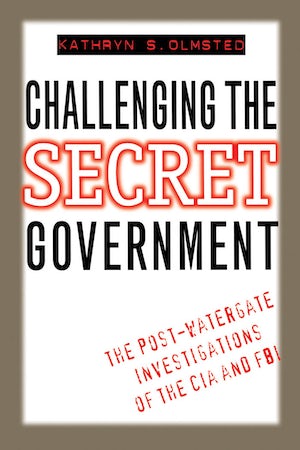 To purchase online via an independent bookstore, visit Bookshop.org
Just four months after Richard Nixon's resignation, New York Times reporter Seymour Hersh unearthed a new case of government abuse of power: the CIA had launched a domestic spying program of Orwellian proportions against American dissidents during the Vietnam War. The country's best investigative journalists and members of Congress quickly mobilized to probe a scandal that seemed certain to rock the foundations of this secret government. Subsequent investigations disclosed that the CIA had plotted to kill foreign leaders and that the FBI had harassed civil rights and student groups. Some called the scandal 'son of Watergate.' Many observers predicted that the investigations would lead to far-reaching changes in the intelligence agencies. Yet, as Kathryn Olmsted shows, neither the media nor Congress pressed for reforms. For all of its post-Watergate zeal, the press hesitated to break its long tradition of deference in national security coverage. Congress, too, was unwilling to challenge the executive branch in national security matters. Reports of the demise of the executive branch were greatly exaggerated, and the result of the 'year of intelligence' was a return to the status quo. American History/Journalism

"This is a fascinating study of how, just months after Watergate, both press and Congress quietly retreated to the same silk-gloved handling of the CIA and FBI in the name of national security."--Publishers Weekly

"Kathryn Olmsted has provided a useful summary of the Frank Church and Otis Pike investigations. . . . Her conclusions are devastating: Congressional leadership had little interest in pursuing the charges; Gerald Ford's White House, recognizing the complicity of the executive branch, fought skillfully to limit and discredit the inquiries; and the media proved to be a useful, compliant accomplice of both.'-Nation

"This important book is timely as the future of the CIA is debated in both the scholarly and government communities."--Choice

"Olmsted . . . takes us back to the mid-1970s, when the spooks were on the run. . . . She ably chronicles the fall from high expectation to Washington handwringing. . . . Olmsted explodes the myth that this era was a time of journalistic courage and a heyday of investigative reporting."--Washington Monthly