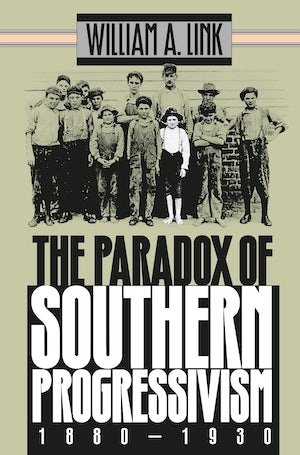 1993 Mayflower Cup for Nonfiction, Society of Mayflower Descendants in the State of North Carolina

Focusing on the cultural conflicts between social reformers and southern communities, William Link presents an important reinterpretation of the origins and impact of progressivism in the South. He shows that a fundamental clash of values divided reformers and rural southerners, ultimately blocking the reforms. His book, based on extensive archival research, adds a new dimension to the study of American reform movements.

The new group of social reformers that emerged near the end of the nineteenth century believed that the South, an underdeveloped and politically fragile region, was in the midst of a social crisis. They recognized the environmental causes of social problems and pushed for interventionist solutions. As a consensus grew about southern social problems in the early 1900s, reformers adopted new methods to win the support of reluctant or indifferent southerners. By the beginning of World War I, their public crusades on prohibition, health, schools, woman suffrage, and child labor had led to some new social policies and the beginnings of a bureaucratic structure. By the late 1920s, however, social reform and southern progressivism remained largely frustrated.

Link's analysis of the response of rural southern communities to reform efforts establishes a new social context for southern progressivism. He argues that the movement failed because a cultural chasm divided the reformers and the communities they sought to transform. Reformers were paternalistic. They believed that the new policies should properly be administered from above, and they were not hesitant to impose their own solutions. They also viewed different cultures and races as inferior.

Rural southerners saw their communities and customs quite differently. For most, local control and personal liberty were watchwords. They had long deflected attempts of southern outsiders to control their affairs, and they opposed the paternalistic reforms of the Progressive Era with equal determination. Throughout the 1920s they made effective implementation of policy changes difficult if not impossible. In a small-scale war, rural folk forced the reformers to confront the integrity of the communities they sought to change.

William A. Link, Richard J. Milbauer Professor of History at the University of Florida, is author of A Hard Country and a Lonely Place: Schooling, Society, and Reform in Rural Virginia, 1870-1920.
For more information about William A. Link, visit the Author Page.

"[The book] forces us to think once again about a part of the South's history that we may have assumed we understood reasonably well and thus joins the short shelf of indispensable books on the subject."--Journal of Southwest Georgia History

"An admirable work full of rich detail that is set within a logical interpretation; it will certainly excite further interest in the 'Progressive' South."--Journal of Southern History

"This exhaustively researched book makes an important contribution to southern history and to our understanding of the Progressive movement."--History of Education Quarterly

"Link has significantly advanced our understanding of the Progressive movement. The sweep of his study from 1880 to 1930 gives us a broad view of the origins and consequences of the movement, and his extensive archival research provides a tantalizing glimpse of progressivism at work in the trenches of policy implementation. His work offers a provocative interpretive framework for more specific state and local studies."--American Historical Review

"Link has accomplished an elegant piece of synthesis and interpretation, and this volume deserves to be widely read. It will be indispensable to those studying the postbellum South, Progressivism, or American reform."--Southern Cultures

"A major reinterpretation of the social history of the New South. [Link] shows in rich detail a society in transition from individualism and localism to a bureaucratic governance that represented both a loss of democracy and a gain in human welfare."--Louis R. Harlan, University of Maryland at College Park