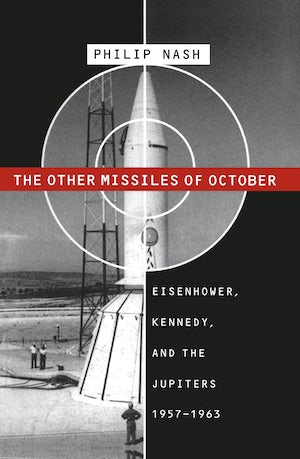 Shedding important new light on the history of the Cold War, Philip Nash tells the story of what the United States gave up to help end the Cuban missile crisis of 1962. By drawing on documents only recently declassified, he shows that one of President Kennedy's compromises with the Soviets involved the removal of Jupiter missiles from Italy and Turkey, an arrangement concealed from both the American public and the rest of the NATO allies. Nash traces the entire history of the Jupiters and explores why the United States offered these nuclear missiles, which were capable of reaching targets in the Soviet Union, to its European allies after the launch of Sputnik. He argues that, despite their growing doubts, both Eisenhower and Kennedy proceeded with the deployment of the missiles because they felt that cancellation would seriously damage America's credibility with its allies and the Soviet Union. The Jupiters subsequently played a far more significant role in Khrushchev's 1962 decision to deploy his missiles in Cuba, in U.S. deliberations during the ensuing missile crisis, and in the resolution of events in Cuba than most existing histories have supposed.

“An excellent and very well written account. . . . This highly readable account should be of interest to students of American foreign policy, NATO, the Cuban Missile Crisis, or either of the two presidential administrations.”--History: Reviews of New Books

"The Cuban Missile Crisis of October 1962 was prompted by Soviet deployment of nuclear-armed missiles in Cuba and the insistence of the United States on their withdrawal. One less-known aspect of the crisis was the role of similar U.S. missiles earlier deployed in Turkey, which became the 'other missiles of October' when the Soviet leaders in turn sought their removal. This well-researched study, drawing on newly available archival sources, traces not only the secret U.S. agreement on and then withdrawal of these missiles, but also the story of how and why, under the Eisenhower and Kennedy administrations, despite growing misgivings, the U.S. missiles came to be in Turkey. It is interesting, good history, and a good read."--Raymond L. Garthoff, author of Reflections on the Cuban Missile Crisis