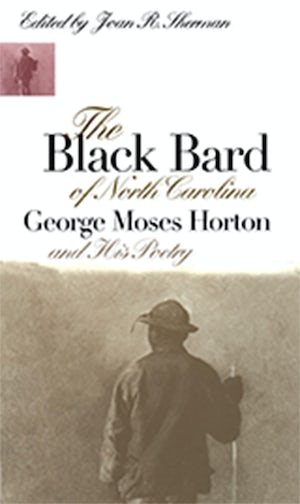 For his humanistic religious verse, his poignant and deeply personal antislavery poems, and, above all, his lifelong enthusiasm for liberty, nature, and the art of poetry, George Moses Horton merits a place of distinction among nineteenth-century African American poets. Enslaved from birth until the close of the Civil War, the self-taught Horton was the first American slave to protest his bondage in published verse and the first black man to publish a book in the South. As a man and as a poet, his achievements were extraordinary.

In this volume, Joan Sherman collects sixty-two of Horton's poems. Her comprehensive introduction--combining biography, history, cultural commentary, and critical insight--presents a compelling and detailed picture of this remarkable man's life and art.

George Moses Horton (ca. 1797-1883) was born in Northampton County, North Carolina. A slave for sixty-eight years, Horton spent much of his life on a farm near Chapel Hill, and in time he fostered a deep connection with the University of North Carolina at Chapel Hill. The author of three books of poetry, Horton was inducted into the North Carolina Literary Hall of Fame in May of 1996.

Joan R. Sherman is professor emerita of English at Rutgers University. She is author and editor of several books on nineteenth-century African American poets.
For more information about Joan R. Sherman, visit the Author Page.

"The Black Bard fills the breach in information about the life and work of this 19th-century African American poet. . . . The gathering of Horton's poetry in one volume leads to insights into influences, themes, subjects, and poetic forms and diction, while uncovering the driving forces behind his poetry, 'the contrast between liberty and bondage.'"----Choice

"This book is a valuable introduction to Horton's life and work that is accessible to both scholars and general readers. Its publication focuses needed attention on the achievements of a remarkable North Carolinian."--North Carolina Historical Review

"Joan Sherman has performed invaluable recovery work in editing the poetry, including previously uncollected poems, of George Moses Horton. Her thoughtful and balanced critical commentary re-situates Horton among his primarily white contemporaries and invites further exploration of the works of this 'slave poet' who left an impressive creative legacy."--Trudier Harris, University of North Carolina at Chapel Hill

"This wonderful courageous man who found his strength and his voice in poems well deserves our thanks."--Nikki Giovanni