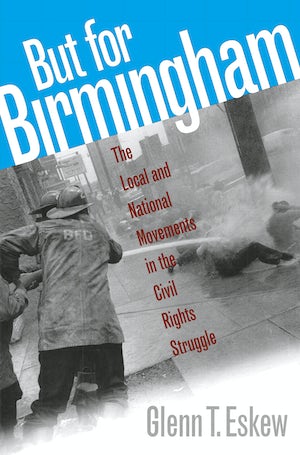 Birmingham served as the stage for some of the most dramatic and important moments in the history of the civil rights struggle. In this vivid narrative account, Glenn Eskew traces the evolution of nonviolent protest in the city, focusing particularly on the sometimes problematic intersection of the local and national movements.

Eskew describes the changing face of Birmingham's civil rights campaign, from the politics of accommodation practiced by the city's black bourgeoisie in the 1950s to local pastor Fred L. Shuttlesworth's groundbreaking use of nonviolent direct action to challenge segregation during the late 1950s and early 1960s.

In 1963, the national movement, in the person of Martin Luther King Jr., turned to Birmingham. The national uproar that followed on Police Commissioner Bull Connor's use of dogs and fire hoses against the demonstrators provided the impetus behind passage of the watershed Civil Rights Act of 1964.

Paradoxically, though, the larger victory won in the streets of Birmingham did little for many of the city's black citizens, argues Eskew. The cancellation of protest marches before any clear-cut gains had been made left Shuttlesworth feeling betrayed even as King claimed a personal victory. While African Americans were admitted to the leadership of the city, the way power was exercised--and for whom--remained fundamentally unchanged.

"A sophisticated and engaging piece of scholarship, But for Birmingham ranks alongside the best of a new wave of histories which skillfully investigate the relationship between the national, regional and local forces which fashioned the Southern freedom struggle."--American Studies

"[A] trenchant account of the Birmingham civil rights movement. . . . Eskew insightfully explores the broader historical context of the confrontations between nonviolent demonstrators mobilized by King's associates in the SCLC and Birmingham police under the commissioner of public safety T. Eugene 'Bull' Connor."--Journal of American History

“A balanced and compelling study. . . . By examining the relationship between the local struggles and the national civil rights movement in Birmingham, Glenn Eskew sheds new light on the meaning and impact of both.”--Register of the Kentucky Historical Society

“A much-needed analysis of the Civil Rights movement in the pivotal city of Birmingham . . . a valuable contribution to the growing body of scholarship on grass-roots civil rights protest . . . [and] a valuable addition to the growing scholarship on the evolution of African American social protest in modern America.”--North Carolina Historical Review

“History at its best. . . . A work of scholarship that provokes one to rethink what one knows, to reconsider what one believes.”--Georgia Historical Quarterly