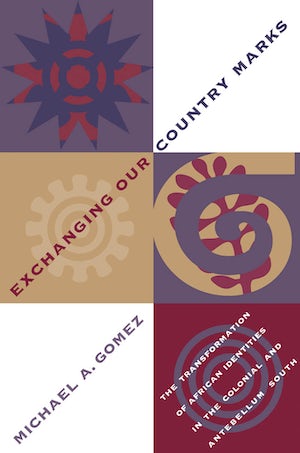 The transatlantic slave trade brought individuals from diverse African regions and cultures to a common destiny in the American South. In this comprehensive study, Michael Gomez establishes tangible links between the African American community and its African origins and traces the process by which African populations exchanged their distinct ethnic identities for one

defined primarily by the conception of race. He examines transformations in the politics, social structures, and religions of slave populations through 1830, by which time the contours of a new African American identity had begun to emerge.

After discussing specific ethnic groups in Africa, Gomez follows their movement to North America, where they tended to be amassed in recognizable concentrations within individual colonies (and, later, states). For this reason, he argues, it is possible to identify particular ethnic cultural influences and ensuing social formations that heretofore have been considered unrecoverable. Using sources pertaining to the African continent

"Every so often an essentially synthetic work appears that is more than a synthesis. Exchanging Our Country Marks by Michael A. Gomez is such a book. Although it relies heavily on secondary sources reinforced by extensive research in runaway slave advertisements in southern newspapers and WPA interviews from the 1930s, Exchanging Our Country Marks is a conceptual tour de force. No brief review can do justice to the nuances and complexities of Gomez's argument. . . . A fully satisfying work that engages the heart as well as the mind."--Southern Cultures

"Exchanging Our Country Marks offers a rare and creative inquiry into the origins of African identity in the United States from 1526 to 1830."--Gaither Reporter

"Gomez is the first trained historian of Africa to draw on the maturing field of African history to try and sense how Africans brought here as slaves, and the children they raised in slavery, became Americans. . . . Gomez gracefully and distinctively enlivens slaves’ understandings of themselves as Igbo, Muslims, parents, children, and--eventually--’Africans’ and Americans."--Journal of Southern History

"Deeply researched in both African and North American sources. . . . His work is carefully organized, with many landmarks for the reader. Well balanced and written, it is a significant contribution to the African experience in America."--International Journal of African Historical Studies

“Advances significantly a dominant trend in recent slavery historiography emphasizing the agency of enslaved African Americans in shaping their world. . . . Gomez has yoked his admirable grasp of recent advances in African historiography with a subtle and sensitive reading of slavery and slave trade documents to craft an extraordinarily rich narrative.”--American Historical Review

“By far the most ambitious, thorough, and sophisticated attempt yet made at describing the impact of variations in West African and West Central African cultures upon the societies that later became the United States.”--The Journal of American History