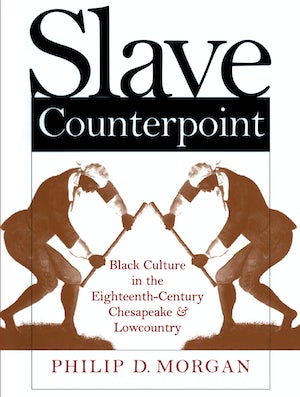 On the eve of the American Revolution, nearly three-quarters of all African Americans in mainland British America lived in two regions: the Chesapeake, centered in Virginia, and the Lowcountry, with its hub in South Carolina. Here, Philip Morgan compares and contrasts African American life in these two regional black cultures, exploring the differences as well as the similarities. The result is a detailed and comprehensive view of slave life in the colonial American South.

Morgan explores the role of land and labor in shaping culture, the

everyday contacts of masters and slaves that defined the possibilities and limitations of cultural exchange, and finally the interior lives of blacks--their social relations, their family and kin ties, and the major symbolic dimensions of life: language, play, and religion. He provides a balanced appreciation for the oppressiveness of bondage and for the ability of slaves to shape their lives, showing that, whatever the constraints, slaves contributed to the making of their history. Victims of a brutal, dehumanizing system, slaves nevertheless strove to create order in their lives, to preserve their humanity, to achieve dignity, and to sustain dreams of a better future.

"The closest [examination] yet made of slave life anywhere before the nineteenth century. . . . Morgan's account is exhaustive . . . in its detail, but it is more than a recovery of hard-to-find facts. It is informed throughout by Morgan's recognition that slavery, as an extreme form of domination, resonates with the ambiguities present in all human relations."--New York Review of Books

"A major reinterpretation of early American history that should attract a wide readership."--Choice

"Authoritative and detailed. . . . Morgan's synthesis draws upon a wealth of social, political, legal, economic, literary, religious and anthropological sources to illuminate through a variety of prisms what he calls 'the core contradiction of slavery--treating persons as things,' which guaranteed that master and slave would be thrust apart, even as they were bound inextricably together."--Los Angeles Times Book Review (Best Nonfiction Books of 1998 issue)

"An exhaustive and authoritative synthesis of slavery in the Chesapeake (Virginia and Maryland) and the South Carolina Lowcountry, Slave Counterpoint is also a fine example of comparative history."--Richmond Times-Dispatch

"A monumental social history of slavery in the eighteenth-century Chesapeake region and in the Carolina and Georgia low country."--Robert L. Paquette, Washington Times

"A massive reconstruction of life in the 18th-century American South. . . . [Morgan] sets out to provide 'a balanced appreciation for the oppressiveness of bondage and of the ability of slaves to reshape their lives.' He has succeeded splendidly, and in the process reminded modern readers that the world of the 18th century is not so distant as they sometimes imagine."--New York Times Book Review