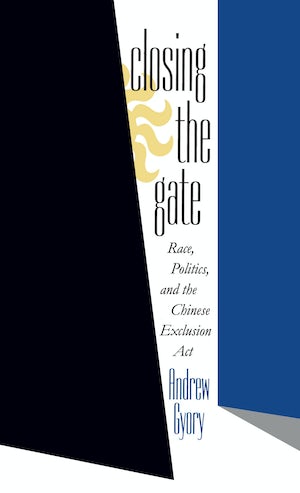 The Chinese Exclusion Act of 1882, which barred practically all

Chinese from American shores for ten years, was the first federal

or nationality. By changing America's traditional policy of open

immigration, this landmark legislation set a precedent for future

restrictions against Asian immigrants in the early 1900s and

against Europeans in the 1920s.

Tracing the origins of the Chinese Exclusion Act, Andrew

during Reconstruction and the Gilded Age. Rather than directly

sought a safe, nonideological solution to the nation's industrial

demands for an end simply to imported contract labor, they

claimed instead that working people would be better off if there

were no Chinese immigrants. By playing the race card, Gyory

labor, and not a general racist atmosphere--provided the motive

force behind the era's most racist legislation.

Andrew Gyory holds a Ph.D. in American history from the University of Massachusetts. He lives in Maplewood, New Jersey.
For more information about Andrew Gyory, visit the Author Page.

"The most detailed account available of Chinese exclusion as a national issue."--Journal of Interdisciplinary History

"A fine book, well argued, well documented, and well written. It raises important issues of democratic politics. Like a tragic drama, it offers examples of human courage and character in a losing battle to the craven drive for power by a few consummate manipulators of public prejudice. Read and be warned."--Pacific Northwest Quarterly

"Gyory manages to provide an informative new study by combining extensive research with engaging prose. . . . An excellent work. Certain to become the standard account of America’s initial Chinese exclusion, it is highly recommended for all academic and larger public libraries."--Choice

"One of the most noteworthy contributions in U.S. political history in years. Gyory rescues our understanding of the tragedy of Chinese exclusion (and by extension other American racial practices) from the glib generalities reliant on a resort to 'racist culture' in favor of a painstaking--if painful--account of specific political agency."--Leon Fink, University of North Carolina at Chapel Hill

"Gyory's work is the first fresh, original interpretation of the origins of Chinese exclusion in quite some time. It is an exciting study because he challenges the standard interpretations which have stood for years and become incorporated into the 'textbook' versions of American history."--Lucy E. Salyer, University of New Hampshire