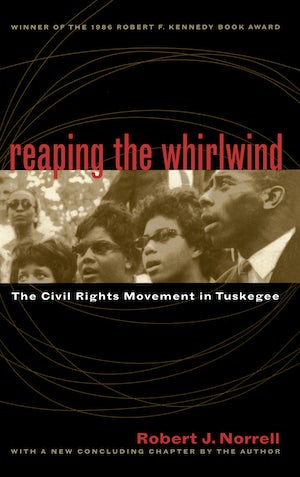 In this classic and compelling account, Robert Norrell traces the course of the civil rights movement in Tuskegee, Alabama, capturing both the unique aspects of this key Southern town's experience and the elements that it shared with other communities during this period.

Home to Booker T. Washington's famed Tuskegee Institute, the town of Tuskegee boasted an unusually large professional class of African Americans, whose economic security and level of education provided a base for challenging the authority of white conservative officials. Offering sensitive portrayals of both black and white figures, Norrell takes the reader from the founding of the Institute in 1881 and early attempts to create a harmonious society based on the separation of the races to the successes and disappointments delivered by the civil rights movement in the 1960s.

First published in 1985, Reaping the Whirlwind has been updated for this edition. In a newly expanded final chapter, Norrell brings the story up to the present, examining the long-term performance of black officials, the evolution of voting rights policies, the changing economy, and the continuing struggle for school integration in Tuskegee in the 1980s and 1990s.

Robert J. Norrell holds the Bernadotte Schmitt Chair of History at the University of Tennessee. His books include Opening Doors: An Appraisal of Contemporary American Race Relations.
For more information about Robert J. Norrell, visit the Author Page.

"Reaping the Whirlwind may well be the most articulate, moving, personal and compassionate scholarly case study of the impact of the Civil Rights movement in the South to appear to date. It is both a tour de force of effective writing and a model of fairminded reporting."--Howard R. Lamar, Southern Changes

"A superb, often exciting rendition of the complex interactions and misunderstandings between blacks and whites in a key Southern town. Historian Norrell has captured both the public and private personas of the leading black and white players, which makes his story come alive."--Kirkus Reviews

"Should become a civil rights classic--not only as an absorbing account of the struggle for racial justice in a Southern town but as a significant revaluation of civil rights tactics and strategy."--Arthur Schlesinger Jr.

"Reaping the Whirlwind tells how the abstraction 'civil rights' became a reality in one Southern community. Its great value is in its particularity, and in Robert Norrell's unblinking gaze at what really happened."--Tom Wicker

"A literary achievement that provides extraordinary insight into our nation's struggle with race relations."--Senator Edward Kennedy