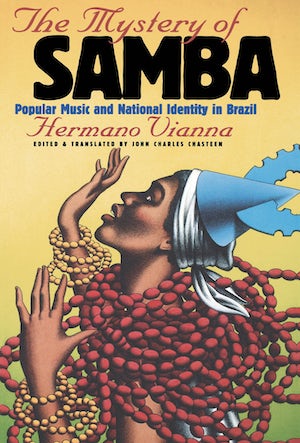 Samba is Brazil's "national rhythm," the foremost symbol of its culture and nationhood. To the outsider, samba and the famous pre-Lenten carnival of which it is the centerpiece seem to showcase the country's African heritage. Within Brazil, however, samba symbolizes the racial and cultural mixture that, since the 1930s, most Brazilians have come to believe defines their unique national identity.

But how did Brazil become "the Kingdom of Samba" only a few decades after abolishing slavery in 1888? Typically, samba is represented as having changed spontaneously, mysteriously, from a "repressed" music of the marginal and impoverished to a national symbol cherished by all Brazilians. Here, however, Hermano Vianna shows that the nationalization of samba actually rested on a long history of relations between different social groups--poor and rich, weak and powerful--often working at cross-purposes to one another.

A fascinating exploration of the "invention of tradition," The Mystery of Samba is an excellent introduction to Brazil's ongoing conversation on race, popular culture, and national identity.

Hermano Vianna is a Brazilian anthropologist and writer who currently works in television.
For more information about Hermano Vianna, visit the Author Page.

"This very readable book provides an interpretation of an aspect of the Brazilian culture that has remained unexplored until now."--Choice

"Despite the fact that Brazil is one of the three most prolific sources for the continuing evolution of popular music (the United States and Cuba being two others), an outsider without a decent knowledge of Portuguese must struggle to grasp the significance of the country's music and its culture. Hermano Vianna's new book is a valiant effort to make sense of both. . . . Popular music isn't only what one turns to when taking a rest from important things like writing social history. It can actually work, if sometimes indirectly, to change the world."--Lingua Franca

"A wonderfully knowledgeable and thoughtful investigation of how Brazil and samba helped create each other."--Alma Guillermoprieto, author of Samba

"A subtle and convincing analysis of the connection between popular culture and its manipulation by the elite. A major contribution to our understanding of the development of Brazilian national identity."--Thomas E. Skidmore, Brown University

"The Mystery of Samba points to the Brazilian nation's strong expression of popular culture as a long term transcultural experience between cultural elites and popular voices both inside and outside Brazil. . . . This masterful work is a very current and major contribution to the debate about culture across the social sciences and the humanities."--Nelson H. Vieira, Brown University