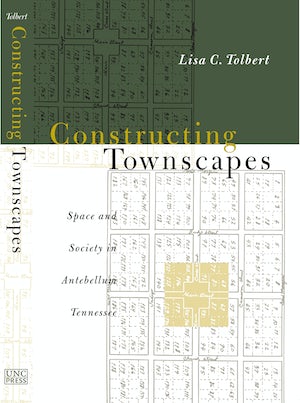 The antebellum South has been drawn largely as a map of contrasting extremes--a vast agrarian landscape punctuated by a few major cities. Small towns have either been viewed as sleepy villages that reflected the countryside or dismissed as urban microcosms. In Constructing Townscapes, however, the small town emerges from obscurity to reveal its distinctive and influential role in the southern landscape.

Using existing architectural evidence as well as photographs, maps, diaries, letters, and newspapers, Lisa Tolbert shows how residents of four county seats in antebellum Middle Tennessee rebuilt and reorganized their towns in response to changing social and economic circumstances. She also illuminates the ways in which three seemingly powerless groups--women, young men, and slaves--influenced the arrangement of town space, vividly retracing the footsteps of members of these groups as they traveled town streets to perform their daily routines.

Through careful analysis of the relationships between the material and social contexts of town life, Tolbert shows that small towns, whose stories have usually been considered incidental to the course of southern history, should actually be understood as important components of antebellum southern culture.

Lisa C. Tolbert, who grew up in Murfreesboro, Tennessee, teaches American cultural history at the University of North Carolina at Greensboro.
For more information about Lisa C. Tolbert, visit the Author Page.

"This book not only broadens our understanding of the history of the antebellum townscape but also erects a guidepost on our path to a more integrative study of the built environment."-Journal of the Society of Architectural Historians

"Constructing Townscapes is an eminently readable volume that should be required for any history, architecture, landscape, cultural geography and archaeology class."--Vernacular Architecture Newsletter

"Fascinating. . . . Constructing Townscapes will surely become a model for future students of the American cultural landscape."--Journal of American History

"A thoughtful and interesting book that enhances our understanding of the antebellum era in the South and of the dynamics of small town life."--Journal of Southern History

"Tolbert explores issues of work, family, and disorder . . . presenting a facet of antebellum slavery rarely seen in the historical literature."--Journal of the Early Republic

"Represents a vigorous challenge to the somewhat more rigid parameters of quantitative history that is sometimes employed in urban studies. The fact that antebellum towns possessed fluid borders has been acknowledged by many. However, Lisa Tolbert’s interdisciplinary approach demonstrates the potential of looking beyond the census returns and examining spatial and architectural change as a creative means to uncover the mysteries of small towns in the Old South."--Southern Historian