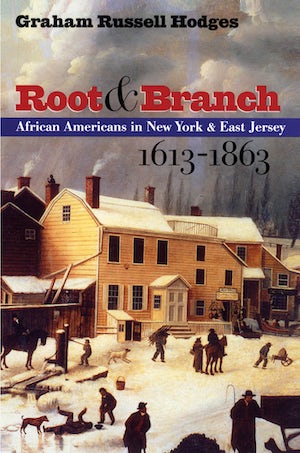 In this remarkable book, Graham Hodges presents a comprehensive history of African Americans in New York City and its rural environs from the arrival of the first African--a sailor marooned on Manhattan Island in 1613--to the bloody Draft Riots of 1863. Throughout, he explores the intertwined themes of freedom and servitude, city and countryside, and work, religion, and resistance that shaped black life in the region through two and a half centuries.

Hodges chronicles the lives of the first free black settlers in the Dutch-ruled city, the gradual slide into enslavement after the British takeover, the fierce era of slavery, and the painfully slow process of emancipation. He pays particular attention to the black religious experience in all its complexity and to the vibrant slave culture that was shaped on the streets and in the taverns. Together, Hodges shows, these two potent forces helped fuel the long and arduous pilgrimage to liberty.

"Root & Branch sheds tremendous light upon African-American community formation in the urban North. . . . Hodges has managed to paint a complete and complex picture of the transition from slavery to freedom made by African Americans. Hodges's narrative proves exceptionally strong in the arenas of religion and rebellion."--Journal of the Early Republic

"Hodges eloquently refutes the notion that northern slavery was more benign than its southern or Caribbean counterparts. . . . A superb work of scholarship. Hodges has mined a truly impressive range of materials to create a compelling account of the contours of black life in a region that historians of slavery have generally chosen to ignore."--Journal of American History

"A thoroughly researched and compelling picture of African Americans in New York and East Jersey forging a distinctive, syncretic culture that served as the engine of their struggle for freedom."--American Historical Review

"In this compelling and provocative book, Graham Hodges asks us to look at the early history of African Americans in the New York region with fresh eyes. . . . Hodges's work clearly deserves the attention of all who study African Americans in the mid-Atlantic area. This compact overview of the struggles of the founding generations of New York's large and influential black community offers the mature reflections of a scholar who has spent many years recovering the stories of a people who indelibly shaped the region's history."--Pennsylvania Magazine of History and Biography

"Hodges has taken on the commendable and consuming task of writing the history of black New York from its colonial beginnings in 1613 through the tumultuous early years of the Civil War. . . . Hodges has contributed tremendously not only to the historiography of African-American life, but also to the narratives of colonial, early American, and antebellum history."--Journal of the Early Republic

"Hodges's praiseworthy effort displays the rich source material and potential in the story of black New York generations before Harlem's rise. His efforts to connect his findings to recent scholarship on slavery and black identity and cultural development further suggest the capacity black New York's story holds to clarify both traditional and alternative paradigms for the contested meaning of slavery, African-American community formation, and race relations."--William and Mary Quarterly