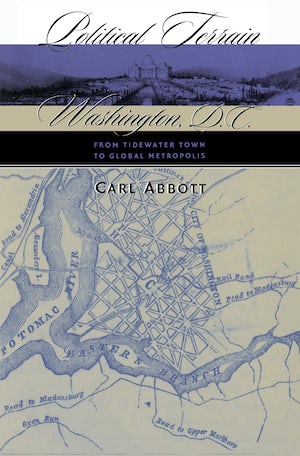 Washington, D.C., President John F. Kennedy once remarked, is a city of "southern efficiency and northern charm." Kennedy's quip was close to the mark. Since its creation two centuries ago, Washington has been a community with multiple personalities. Located on the regional divide between North and South, it has been a tidewater town, a southern city, a coveted prize in fighting between the states, a symbol of a reunited nation, a hub for central government, an extension of the Boston-New York megalopolis, and an international metropolis.

In an exploration of the many identities Washington has taken on over time, Carl Abbott examines the ways in which the city's regional orientation and national symbolism have been interpreted by novelists and business boosters, architects and blues artists, map makers and politicians. Each generation of residents and visitors has redefined Washington, he says, but in ways that have utilized or preserved its past. The nation's capital is a city whose history lives in its neighborhoods, people, and planning, as well as in its monuments and museums.

Carl Abbott is professor of urban studies and planning at Portland State University. His books include The Metropolitan Frontier: Cities in the Modern American West and The New Urban America: Growth and Politics in Sunbelt Cities.
For more information about Carl Abbott, visit the Author Page.

"Abbott tells his history in an easy narrative of local and national events, enriched by repeated references to contemporary fiction. Beneath the vignettes of visitors and residents lies a solid framework of analysis."—The Journal of American History

"This provocative book does much to complicate our ideas about the city, arguing for its paradoxical modernity and its underexamined similarities to the cities of the modern sunbelt."—Journal of Interdisciplinary History

"In Political Terrain, Carl Abbott takes a completely fresh look at the nation's capital in global as well as regional terms. In examining the contested social construction of Washington's identity, he explores issues central to national character. After reading this book, no one will see Washington in quite the same way."—Howard Gillette Jr., George Washington University