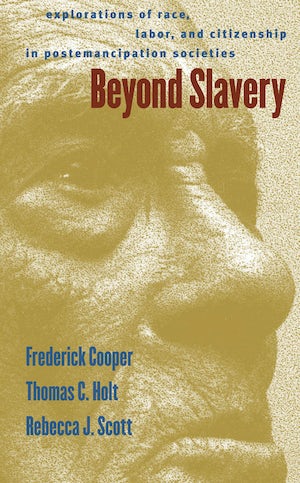 In this collaborative work, three leading historians explore one of the most significant areas of inquiry in modern historiography--the transition from slavery to freedom and what this transition meant for former slaves, former slaveowners, and the societies in which they lived. Their contributions take us beyond the familiar portrait of emancipation as the end of an evil system to consider the questions and the struggles that emerged in freedom's wake.

Thomas Holt focuses on emancipation in Jamaica and the contested meaning of citizenship in defining and redefining the concept of freedom; Rebecca Scott investigates the complex struggles and cross-racial alliances that evolved in southern Louisiana and Cuba after the end of slavery; and Frederick Cooper examines the intersection of emancipation and imperialism in French West Africa. In their introduction, the authors address issues of citizenship, labor, and race, in the post-emancipation period and they point the way toward a fuller understanding of the meanings of freedom.

Frederick Cooper is Charles Gibson Collegiate Professor of History at the University of Michigan.
For more information about Frederick Cooper, visit the Author Page.

Thomas C. Holt is the James Westfall Thompson Professor of American and African American History at the University of Chicago.
For more information about Thomas Cleveland Holt, visit the Author Page.

Rebecca J. Scott is Frederick Huetwell Professor of History at the University of Michigan.
For more information about Rebecca J. Scott, visit the Author Page.

"A masterful piece. . . . A valuable thematic summary of postemancipation societies. . . . [It] will be widely discussed in upper-level history courses and graduate seminars, and it should also attract the interest and admiration of scholars on both sides of the Atlantic."--Journal of Southern History

"A powerful. . . exploration of the connections between classical political economy, race, class, gender, and labor. . . . Deserves a wide readership."--Journal of American History

"The elegant essays in this volume explore the social and political changes that took place in colonial African and New World societies after slave emancipation. . . . The authors are to be congratulated for putting together a useful and stimulating volume. Their collaborative effort not only demonstrates the utility of comparative history but provides specialists in one region a handy summary of the kinds of work being done elsewhere."--American Historical Review

"In this collaborative work spanning from Jamaica in the 1830s to French West Africa in the 1940s, three distinguished historians in the field describe, with nuance and complexity, the cultural landscape of postemancipation societies in Africa and the Americas."--Gulf South Historical Review

"A short review cannot do justice to the complexities within these pages. Each of the authors, for example, treats or touches on issues of gender in important ways, opening up pathways for further inquiries and research in all three sites."--Harvard Business History Review

"Since the publication of the truly pathbreaking books by Frank Tannenbaum and Kenneth Stampp, following World War II, our understanding of New World slavery has been revolutionized by literally thousands of well-researched books and scholarly articles. Yet only a few historians have turned to serious investigations of the meaning of emancipation and the longer-term consequences of racial slavery. Frederick Cooper (for Africa), Thomas C. Holt (for the British West Indies), and Rebecca J. Scott (for Cuba and Louisiana) are the most imaginative pioneers of this scholarship. Their new collaborative work will be essential reading for everyone interested in racial slavery and its intercontinental legacies."--David Brion Davis, Yale University