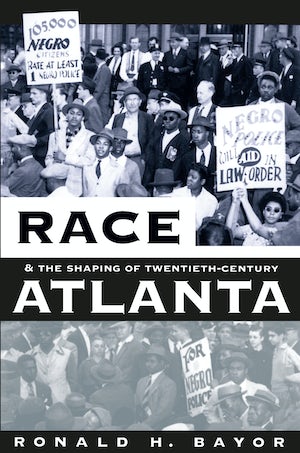 Atlanta is often cited as a prime example of a progressive New South metropolis in which blacks and whites have forged "a city too busy to hate." But Ronald Bayor argues that the city continues to bear the indelible mark of racial bias. Offering the first comprehensive history of Atlanta race relations, he discusses the impact of race on the physical and institutional development of the city from the end of the Civil War through the mayorship of Andrew Young in the 1980s. Bayor shows the extent of inequality, investigates the gap between rhetoric and reality, and presents a fresh analysis of the legacy of segregation and race relations for the American urban environment.

Bayor explores frequently ignored public policy issues through the lens of race--including hospital care, highway placement and development, police and fire services, schools, and park use, as well as housing patterns and employment. He finds that racial concerns profoundly shaped Atlanta, as they did other American cities. Drawing on oral interviews and written records, Bayor traces how Atlanta's black leaders and their community have responded to the impact of race on local urban development. By bringing long-term urban development into a discussion of race, Bayor provides an element missing in usual analyses of cities and race relations.

Ronald H. Bayor is professor of history at the Georgia Institute of Technology and editor of the Journal of American Ethnic History. His books include Neighbors in Conflict: The Irish, Germans, Jews, and Italians of New York City, 1929-1941 and Fiorello La Guardia: Ethnicity and Reform.

"A richly detailed, perceptive examination of the powerful force of race in shaping the American city. Bayor has expertly and graphically portrayed the enormous burden in time, energy, dollars, human pain, and wasted human resources levied by urban racism and the policy of apartheid."--American Historical Review

"A marvelous study of the role of race in the development of Atlanta. . . . Well-written and analytically engaging, Race and the Shaping of Twentieth-Century Atlanta makes a substantial contribution toward developing a broader understanding of the importance of race in the planning, development and administration of twentieth-century urban America and will prove valuable reading for historians of African America, city planners, urban historians and anyone else who is interested in understanding the complexity of the forces at work in American cities, and how at least one American city has come to be the way it is."--Journal of Social History

"In writing his revealing portrait of Atlanta, Bayor has taken a fresh perspective by analyzing white racism as a determinant of spatial development, of the growth of social and economic institutions, and of the course of politics in the twentieth century. . . . Bayor has added significantly to our understanding of the implications of race by demonstrating the costs of segregation for white as well as for black citizens, both of whom were losers as Atlanta grew and apparently prospered."--Journal of Southern History

"This comprehensive presentation of race as the principal factor in the shaping of a city is a valuable contribution to urban and African-American history."--Reviews in American History

"Energized with insights and anecdotal information. . . . An important and ground-breaking study of Atlanta and its development during the twentieth century. Ron Bayor's book is a must-read for those who study the history of this city."--Atlanta History

"A significant historical account of deplorable, and often appalling, developments. . . . Ronald Bayor’s work exposes the vast gap that existed between the pretty racial picture of Atlanta that the city’s white power structure consistently tried to purvey and the racial reality."--Mississippi Quarterly