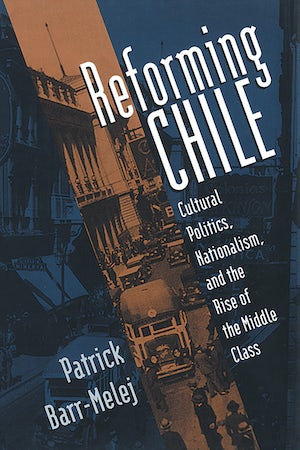 To purchase online via an independent bookstore, visit Bookshop.org
Highlighting the crucial yet largely overlooked role played by society's middle layers in the historical development of Latin America, Patrick Barr-Melej provides the first comprehensive analysis of the rise of Chile's middle-class reform movement and its profound impact on that country's cultural and political landscapes. He shows how a diverse collection of middle-class intellectuals, writers, politicians, educators, and bureaucrats forged a "progressive" nationalism and advanced an ambitious cultural-political project between the 1890s and 1940s. Together, reformers challenged the power of elite groups and sought to quell working-class revolutionary activism as they endeavored to democratize culture and fortify liberal democracy.

Using sources that range from archival documents and newspapers to short stories, novels, and school textbooks, Barr-Melej examines the reform movement's cultural ideas and their political applications, especially as they were articulated in the areas of literature and public education. In the process, he provides a new framework for understanding Chile's cultural and political evolution, as well as the complicated place of the middle class in a society experiencing the swift changes inherent in capitalist modernization.

"[Barr-Melej's] analysis is often compelling, particularly when he discusses the effect of the reformist movement on state education policy."--Times Literary Supplement

"Will interest scholars of Chile, of twentieth-century nationalisms in Latin America, and of middle-class politics worldwide. . . . Compelling and long overdue. . . . Barr-Melej's important book does a great service by unearthing middle-class reformists' views toward the significant issues of national development and class relations and by supplying glimpses of opposing nationalist ideals."--American Historical Review

"A complex and accurate portrait of the concerns, culture, and influence of Chile's emerging middle class. . . . Offers a much-needed corrective to narrow readings of the 'political' in Chilean history, re-introducing some of the period's key actors at a defining moment in the emergence and consolidation of nationalist discourse." --The Americas

"Barr-Melej's study presents a detailed and persuasive case for the pivotal role of the rising middle class 'mesocracy' in Chile, both through its dominant impact on literary culture and public education and through its reformist, middle-of-the-road, and increasingly influential position within Chilean politics."--Latin American Research Review