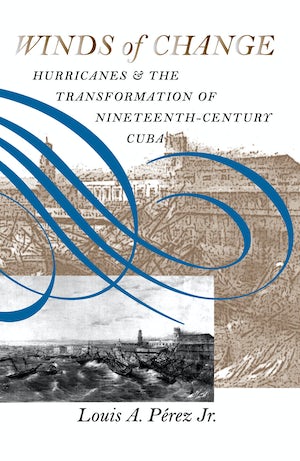 The first book to establish hurricanes as a key factor in the development of modern Cuba, Winds of Change shows how these great storms played a decisive role in shaping the economy, the culture, and the nation during a critical century in the island's history.

Always vulnerable to hurricanes, Cuba was ravaged in 1842, 1844, and 1846 by three catastrophic storms, with staggering losses of life and property. Louis P

Louis A. Perez Jr. is J. Carlyle Sitterson Professor of History at the University of North Carolina at Chapel Hill. His books include On Becoming Cuban: Identity, Nationality, and Culture, winner of the 2000 Bolton-Johnson Prize, and The War of 1898: The United States and Cuba in History and Historiography.
For more information about Louis A. Pérez Jr., visit the Author Page.

"Louis Pérez Jr. leaves us in no doubt of the power of great hurricanes to change the course of the past in economic, political and social ways. . . . [An] elegant discourse on the powerful role of hurricanes in Cuban history."--Los Angeles Times

"A short but elegant discourse on the powerful role of hurricanes in Cuban history."--Los Angeles Times Book Review

"Pérez Jr. makes valuable contribution to the small but growing number of Latin American case studies in the field of environmental history."--Journal of American History

"In Pérez's new book . . . the major hurricanes of the 1840s are historical actors. . . . Responding to hurricanes as a shared experience shaped how Cubans would 'negotiate adversity of all types.'"--Chronicle of Higher Education

"The strength of Pérez's analysis rests with his insightful examination of how hurricanes affected each sector of Cuban society in different ways. . . . He judiciously makes a strong and innovative case for how environmental history can provide new insights into well-covered topics in Cuban history."--Latin American Research Review

"[Pérez] regales us with a study that inscribes itself in the growing body of revisionist Latin American and Caribbean historiography which . . . refocus[es] our approach to the region's past. . . . Pérez deftly assembles both the extent of the devastation and responses to the disruption and disarray that, he argues, provide clues to the broader Cuban psyche in negotiating adversity."--Journal of Latin American Studies