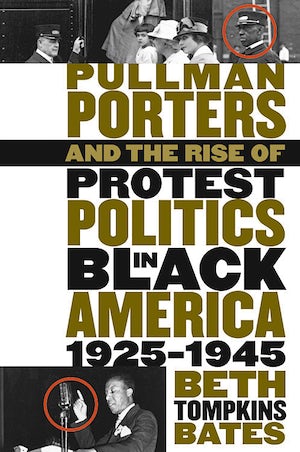 Between World War I and World War II, African Americans' quest for civil rights took on a more aggressive character as a new group of black activists challenged the politics of civility traditionally embraced by old-guard leaders in favor of a more forceful protest strategy. Beth Tompkins Bates traces the rise of this new protest politics--which was grounded in making demands and backing them up with collective action--by focusing on the struggle of the Brotherhood of Sleeping Car Porters (BSCP) to form a union in Chicago, headquarters of the Pullman Company.

Bates shows how the BSCP overcame initial opposition from most of Chicago's black leaders by linking its union message with the broader social movement for racial equality. As members of BSCP protest networks mobilized the black community around the quest for manhood rights and economic freedom, they broke down resistance to organized labor even as they expanded the boundaries of citizenship to include equal economic opportunity. By the mid-1930s, BSCP protest networks gained platforms at the national level, fusing Brotherhood activities first with those of the National Negro Congress and later with the March on Washington Movement. Lessons learned during this era guided the next generation of activists, who carried the black freedom struggle forward after World War II.

"Focusing much of her attention on Chicago's black community, Bates skillfully charts how the porters' union overcame the conservative opposition of local black leaders, generated a groundswell of unprecedented community support for black unionization and, in the 1930s, pushed organized black politics in a more activist direction."--Chicago Tribune

"[A] splendid study. . . . By skillfully placing the union efforts of anonymous railway workers in their proper place at the forefront of the 20th Century struggle for black civil rights, Beth Tompkins Bates has given us a book of inspiring vision. This is an American story worth remembering and celebrating."--Chicago Tribune

"This well-documented study provides a valuable and needed reexamination of a largely underappreciated organization that helped lay the groundwork for the Civil Rights Movement."--Choice

"Bates allows her readers to gain a thorough knowledge of the racial climate in America through her flawlessly adept book that chronicles the politics of race in black America from the New Negro Movement of the Reconstruction era through World War II. . . . Bates' book is extremely insightful in that it allows the reader to gain an understanding of how and why racial solidarity amongst African Americans came to pass at that time in particular, and how it enabled African Americans to utilize protest politics as a viable tool in our quest for freedom in America."--QBR

"A dazzling portrait of the men and women in Chicago who directed change. . . . Bates adds several important dimensions to our understanding of the porters and their role in protest politics."--Journal of American History

"Helps to bridge . . . the historiographies of black and working-class America. . . . This engaging, substantial volume will take its place as our most illuminating study of the BSCP to date."--American Historical Review