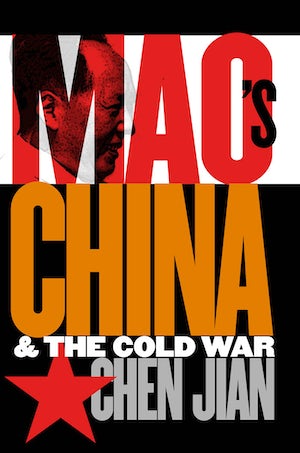 To purchase online via an independent bookstore, visit Bookshop.org
This comprehensive study of China's Cold War experience reveals the crucial role Beijing played in shaping the orientation of the global Cold War and the confrontation between the United States and the Soviet Union.

The success of China's Communist revolution in 1949 set the stage, Chen says. The Korean War, the Taiwan Strait crises, and the Vietnam War--all of which involved China as a central actor--represented the only major "hot" conflicts during the Cold War period, making East Asia the main battlefield of the Cold War, while creating conditions to prevent the two superpowers from engaging in a direct military showdown. Beijing's split with Moscow and rapprochement with Washington fundamentally transformed the international balance of power, argues Chen, eventually leading to the end of the Cold War with the collapse of the Soviet Empire and the decline of international communism.

Based on sources that include recently declassified Chinese documents, the book offers pathbreaking insights into the course and outcome of the Cold War.

"Lays out the latest, if not final, historical interpretations of how decisions were made and policies executed by governments in Beijing, Washington, Moscow, and neighboring capitals. Chen brings all of these events together in a highly readable fashion."--Political Science Quarterly

"An insightful, richly nuanced and well-documented analysis of how and why Mao made the choices he did. In this regard, Chen's book is unsurpassed."--The China Journal

"In his excellent study of Mao's foreign policy, Chen Jian builds on . . . recent work to offer a stimulating and provocative analysis of key moments in the development of China's foreign relations. . . . The virtues of this work are many. Clearly written and superbly researched, it nicely engages existing scholarship in the field. . . . The scope of this study, the originality of its thesis, and the author's command of the material make Mao's China required reading for students and scholars interested in the Cold War or modern Chinese history."--Journal of Military History

"This book belongs on the desk of every student of the Cold War. It offers one of the deepest and most richly documented analyses of China's role in world affairs from the Communist victory on mainland China in 1949 to visits by Henry Kissinger and Richard Nixon to Beijing in the early 1970s."--Journal of Cold War Studies

"Chen has taken some giant steps toward advancing the West's understanding of Mao Zedong's policies during the Cold War. His book is filled with new information from archives and interviews with former Chinese officials. . . . Chen's extensive documentation will boldly challenge the revisionist view of a more pragmatic Mao."--Foreign Affairs