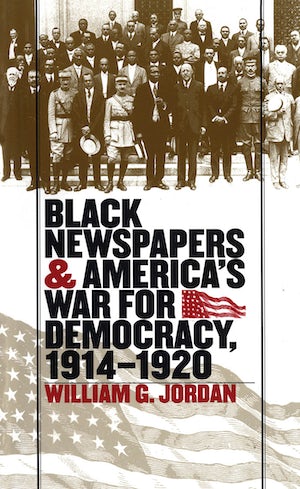 During World War I, the publishers of America's crusading black newspapers faced a difficult dilemma. Would it be better to advance the interests of African Americans by affirming their patriotism and offering support of President Wilson's war for democracy in Europe, or should they demand that the government take concrete steps to stop the lynching, segregation, and disfranchisement of blacks at home as a condition of their participation in the war?

This study of their efforts to resolve that dilemma offers important insights into the nature of black protest, race relations, and the role of the press in a republican system. William Jordan shows that before, during, and after the war, the black press engaged in a delicate and dangerous dance with the federal government and white America--at times making demands or holding firm, sometimes pledging loyalty, occasionally giving in.

But although others have argued that the black press compromised too much, Jordan demonstrates that, given the circumstances, its strategic combination of protest and accommodation was remarkably effective. While resisting persistent threats of censorship, the black press consistently worked at educating America about the need for racial justice.

"This is by far the most thorough, scholarly treatment of the black press during World War I and the Red Scare era that followed. . . . Exceptionally well written. . . . An excellent book for a mass communication class or a black history class."--Journalism History

"A well-balanced treatment of one of the major institutions in the black world. . . . Jordan has made extensive use of primary and secondary sources in this study. It is a work that will inform scholars and students alike about an important period in the history of the black press."--Journal of Southern History

"A useful descriptive account of the African-American press during the World War I era. Written in a clear and lucid manner, this book links the black press of the early twentieth century with its predecessors in antislavery and post-Reconstruction eras. . . . Instructive reading for undergraduate students in African-American and U.S. political and media history."--American Historical Review

"Masterfully describes the role of the black press in forcing America to confront the hypocrisy of its domestic racial policies and practices during World War I. . . . The author's well-documented work reveals how the U.S. black press used the war to promote advancement of its agenda while walking a tightrope over the threat of government censorship and accusations of disloyalty. . . . Sheds further light on the role of the black press in U.S. history and brings greater understanding of the complexities involved in the promulgation of alternative news media. . . . Scholars interested in the disciplines of rhetoric, journalism, political science, and American history among others will benefit greatly from [Jordan's] perspectives."--Rhetoric & Public Affairs