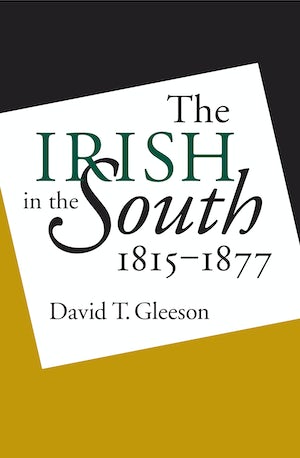 The only comprehensive study of Irish immigrants in the nineteenth-century South, this book makes a valuable contribution to the story of the Irish in America and to our understanding of southern culture.

The Irish who migrated to the Old South struggled to make a new home in a land where they were viewed as foreigners and were set apart by language, high rates of illiteracy, and their own self-identification as temporary exiles from famine and British misrule. They countered this isolation by creating vibrant, tightly knit ethnic communities in the cities and towns across the South where they found work, usually menial jobs. Finding strength in their communities, Irish immigrants developed the confidence to raise their voices in the public arena, forcing native southerners to recognize and accept them--first politically, then socially.

The Irish integrated into southern society without abandoning their ethnic identity. They displayed their loyalty by fighting for the Confederacy during the Civil War and in particular by opposing the Radical Reconstruction that followed. By 1877, they were a unique part of the "Solid South." Unlike the Irish in other parts of the United States, the Irish in the South had to fit into a regional culture as well as American culture in general. By following their attempts to become southerners, we learn much about the unique experience of ethnicity in the American South.

"Gleeson's book is a great contribution toward understanding the complicated nature of the southern Irish in American history."--Choice

"Gleeson makes a convincing case that the southern Irish represent an important untold story of the Irish in America."--American Historical Review

"Thoroughly researched and clearly and often engagingly written, this is an important book that deserves serious attention."--Journal of American History

"Gleeson's extensive research and the clarity of his writing make this book an invaluable contribution to the historical literature on the nineteenth-century South."--Journal of Southern History

"Gleeson's study of Irish immigrants in the eleven states of the lower and upper South is a most welcome first of its kind."--South Carolina Historical Magazine

"Deeply researched. . . . [Gleeson] provides a fascinating and fresh insight into the role of the Southern Irish in the post-Civil War years and Reconstruction."--Civil War Book Review