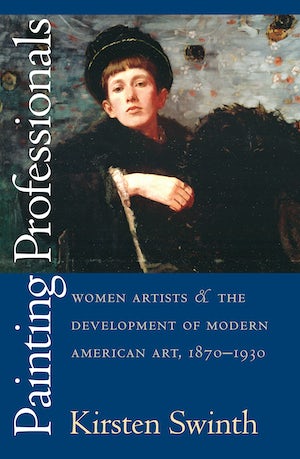 Thousands of women pursued artistic careers in the United States during the late nineteenth century. According to census figures, the number of women among the ranks of professional artists rose from 10 percent to nearly 50 percent between 1870 and 1890. Examining the effects of this change, Kirsten Swinth explores how women's growing presence in the American art world transformed both its institutions and its ideology.

Swinth traces the careers of women painters in New York, Philadelphia, and Boston, opening and closing her book with discussion of the two most famous women artists of the period--Mary Cassatt and Georgia O'Keeffe. Perhaps surprisingly, Swinth shows that in the 1870s and 1880s men and women easily crossed the boundaries separating conventionally masculine and feminine artistic territories to compete with each other as well as to join forces to professionalize art training, manage a fluid and unpredictable art market, and shape the language of art criticism. By the 1890s, however, women artists faced a backlash. Ultimately, Swinth argues, these gender contests spilled beyond the world of art to shape twentieth-century understandings of high culture and the formation of modernism in profound ways.

Kirsten Swinth is associate professor of history and director of the American Studies Program at Fordham University.
For more information about Kirsten Swinth, visit the Author Page.

"Clearly written. . . . A significant cultural history that identifies the parameters for further study by cultural and art historians."--Choice

"Demonstrating the artistic resiliency and professional commitment of two generations of women artists, this comprehensive volume provides an important feminist intervention into the history of American art."--Journal of American History

"A convincing model of the gendering of turn-of-the-century modernism that restores women artists to a deservedly prominent position."--American Studies

"This ambitious, provocative work is a leap forward in establishing the vital connection between women artists and high culture in the United States. Future discussions in the field will find this book impossible to ignore."--American Nineteenth Century History

"Meticulously researched and brilliantly argued, Painting Professionals pictures the unsure paths American women traveled in the late nineteenth century as they sought out training, careers, and a market in the arts. Kirsten Swinth helps explain all those women we see in photographs of late Victorian art classes--where they came from, where they went, and why so many disappeared. A magnificent achievement!"--Wanda M. Corn, Stanford University