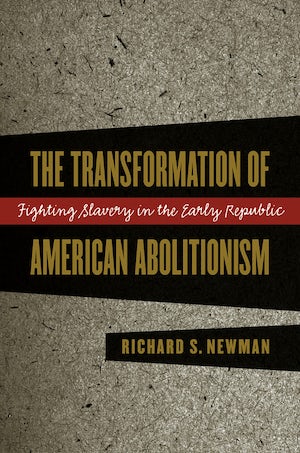 Most accounts date the birth of American abolitionism to 1831, when William Lloyd Garrison began publishing his radical antislavery newspaper, The Liberator. In fact, however, the abolition movement had been born with the American Republic. In the decades following the Revolution, abolitionists worked steadily to eliminate slavery and racial injustice, and their tactics and strategies constantly evolved. Tracing the development of the abolitionist movement from the 1770s to the 1830s, Richard Newman focuses particularly on its transformation from a conservative lobbying effort into a fiery grassroots reform cause.

What began in late-eighteenth-century Pennsylvania as an elite movement espousing gradual legal reform began to change in the 1820s as black activists, female reformers, and nonelite whites pushed their way into the antislavery movement. Located primarily in Massachusetts, these new reformers demanded immediate emancipation, and they revolutionized abolitionist strategies and tactics--lecturing extensively, publishing gripping accounts of life in bondage, and organizing on a grassroots level. Their attitudes and actions made the abolition movement the radical cause we view it as today.

Richard S. Newman is assistant professor of history at Rochester Institute of Technology. He is coeditor of Pamphlets of Protest: An Anthology of Early African American Protest Literature, 1790-1860 and an educational consultant to Strong Museum in Rochester, New York.
For more information about Richard S. Newman, visit the Author Page.

"Deserves careful reading. Its fresh and lively writing and Newman's insistence on linking and contrasting old and new antislavery tactics should encourage researchers and lecturers on antislavery movements to broaden the context of their work."--Journal of Southern History

"A major contribution to our understanding of the first fifty-six years of American abolitionism."--American Historical Review

"Newman's well-crafted and articulate work earns a place among the many worthy studies of abolitionism."--Journal of American History

"A fine historical interpretation of first- and second-wave abolitionism and black protest."--Journal of Interdisciplinary History

"Newman's excellent study of abolitionism has reframed a familiar topic and uncovered a new one. . . . Newman can take a place beside James Brewer Stewart as a master of the history of abolitionism. . . . [This book offers] convincing revision and original insights and research and an engaging and fluid narrative."--Georgia Historical Quarterly