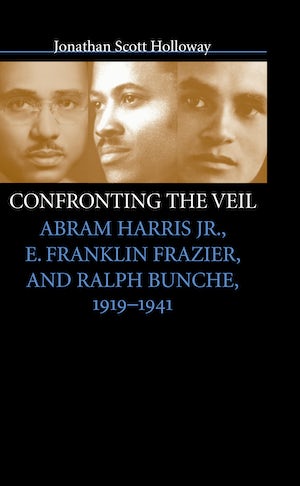 To purchase online via an independent bookstore, visit Bookshop.org
In this book, Jonathan Holloway explores the early lives and careers of economist Abram Harris Jr., sociologist E. Franklin Frazier, and political scientist Ralph Bunche--three black scholars who taught at Howard University during the New Deal and, together, formed the leading edge of American social science radicalism.

Harris, Frazier, and Bunche represented the vanguard of the young black radical intellectual-activists who dared to criticize the NAACP for its cautious civil rights agenda and saw in the turmoil of the Great Depression an opportunity to advocate class-based solutions to what were commonly considered racial problems. Despite the broader approach they called for, both their advocates and their detractors had difficulty seeing them as anything but "black intellectuals" speaking on "black issues."

A social and intellectual history of the trio, of Howard University, and of black Washington, Confronting the Veil investigates the effects of racialized thinking on Harris, Frazier, Bunche, and others who wanted to think "beyond race"--who envisioned a workers' movement that would eliminate racial divisiveness and who used social science to demonstrate the ways in which race is constructed by social phenomena. Ultimately, the book sheds new light on how people have used race to constrain the possibilities of radical politics and social science thinking.

"Holloway skillfully locates the work of his three subjects in their social and political contexts. This book will be valuable for those who are interested in the growing field of African-American intellectual history."--American Historical Review

"A very good book that deserves the close attention of persons interested in and intrigued by the issues of continuity and discontinuity in African American social scientific thinking."--Journal of American History

"In Confronting the Veil Jonathan Holloway has fused rich intellectual history with vivid biography to produce an engrossing exploration in the sociology of racial knowledge. This is an exceptional book."--David Levering Lewis, New York University

"This highly readable and insightful work provides us with compelling group and individual portraits of Bunche, Frazier, and Harris as social scientists, as thinkers, and as intellectual activists. It is an important contribution to the expanding historical discussion of the development and consequences of African American thought and politics in the 1930s."--Waldo E. Martin Jr., University of California, Berkeley