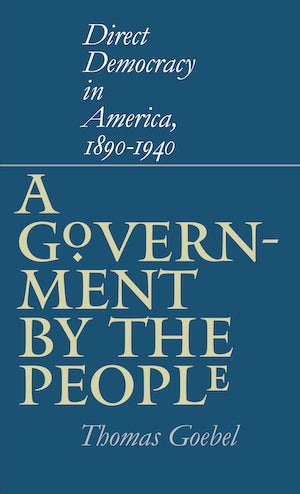 Between 1898 and 1918, many American states introduced the initiative, referendum, and recall--known collectively as direct democracy. Most interpreters have seen the motives for these reform measures as purely political, but Thomas Goebel demonstrates that the call for direct democracy was deeply rooted in antimonopoly sentiment.

Frustrated with the governmental corruption and favoritism that facilitated the rise of monopolies, advocates of direct democracy aimed to check the influence of legislative bodies and directly empower the people to pass laws and abolish trusts. But direct democracy failed to achieve its promises: corporations and trusts continued to flourish, voter turnout rates did not increase, and interest groups grew stronger. By the 1930s, it was clear that direct democracy favored large organizations with the financial and organizational resources to fund increasingly expensive campaigns.

Recent years have witnessed a resurgence of direct democracy, particularly in California, where ballot questions and propositions have addressed such volatile issues as gay rights and affirmative action. In this context, Goebel's analysis of direct democracy's history, evolution, and ultimate unsuitability as a grassroots tool is particularly timely.

Thomas Goebel is author of The Children of Athena: Professionals and the Creation of a Credentialed Social Order, 1870-1920. He was a research fellow at the German Historical Institute in Washington, D.C., from 1997 to 2002.
For more information about Thomas Goebel, visit the Author Page.

"Goebel successfully analyzes the larger political context of US politics in exploring the emergence of the institutional tools of direct democracy: the initiative, the referendum, and the recall. . . . Well-written."--Choice

"An insightful analysis of the origins and operation of the direct democracy movement."--Journal of American History