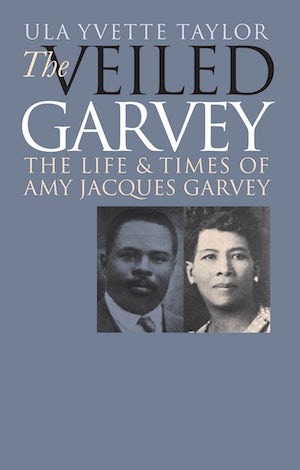 To purchase online via an independent bookstore, visit Bookshop.org
In this biography, Ula Taylor explores the life and ideas of one of the most important, if largely unsung, Pan-African freedom fighters of the twentieth century: Amy Jacques Garvey (1895-1973).

Born in Jamaica, Amy Jacques moved in 1917 to Harlem, where she became involved in the Universal Negro Improvement Association (UNIA), the largest Pan-African organization of its time. She served as the private secretary of UNIA leader Marcus Garvey; in 1922, they married. Soon after, she began to give speeches and to publish editorials urging black women to participate in the Pan-African movement and addressing issues that affected people of African descent across the globe. After her husband's death in 1940, Jacques Garvey emerged as a gifted organizer for the Pan-African cause. Although she faced considerable male chauvinism, she persisted in creating a distinctive feminist voice within the movement. In her final decades, Jacques Garvey constructed a thriving network of Pan-African contacts, including Nnamdi Azikiwe, Kwame Nkrumah, George Padmore, and W. E. B. Du Bois.

Taylor examines the many roles Jacques Garvey played throughout her life, as feminist, black nationalist, journalist, daughter, mother, and wife. Tracing her political and intellectual evolution, the book illuminates the leadership and enduring influence of this remarkable activist.

"[A] splendid biography. . . . Lifts the veil from this remarkably dedicated and accomplished woman. This thoughtful biography is an inspiring contribution to African-American History and Women's Studies."--History

"[Amy Jacques Garvey] emerges as a person of formidable accomplishments. Taylor's study brings them to light in a memorable fashion."--Journal of American History

"In this meticulous rendering of Amy Jacques Garvey's life and ideas, Taylor moves us to reconsider what we think we know about black women's activism during the first decades of the twentieth century. This biographer dares to go where few will in her analysis of nationalism, feminism and twentieth-century black women's political thought. Undoubtedly, this is a significant and timely contribution."--Chana Kai Lee, University of Georgia

"Ula Taylor's The Veiled Garvey is a fine study of Marcus Garvey's second wife that is well thought out and clearly written and gives intellectual and political autonomy to its subject. It is at the same time a feminist critique of the patriarchal characteristics of Marcus Garvey and the Garvey movement. The author makes an accurate estimate of the intellectual, organizational and personal strengths of one of the most remarkable activists in Garveyite Pan-Africanism in the United States from the 1920s to her death in Jamaica in 1973."--Rupert Lewis, University of the West Indies, Jamaica